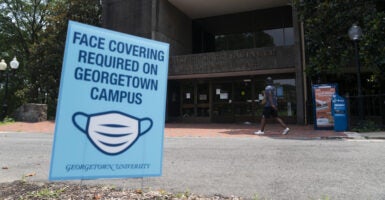 A cancel culture incident at Georgetown Law School perfectly illustrates the corruption of elite American institutions and demonstrates the folly of wishing the “culture war” will simply go away.

“Because Biden said he’d only consider black women for SCOTUS, his nominee will always have an asterisk attached. Fitting that the Court takes up affirmative action next term.” Shapiro said in his first Tweet.

Then the one that he was attacked for: “Objectively best pick for Biden is Sri Srinivasan, who is solid prog & v smart. Even has identity politics benefit of being first Asian (Indian) American. But alas doesn’t fit into the latest intersectionality hierarchy so we’ll get a lesser black woman. Thank heaven for small favors?”

Shapiro quickly clarified that what he was trying to say was that Biden should pick the most qualified candidate and not just someone based on their skin color. It’s a position that a vast majority of Americans agree with.

It didn’t matter. Shapiro was questioning an article on left-wing faith among the American elite—that affirmative action is good and is only opposed by racists. This tweet was the opening to destroy him.

Left-wing media predictably picked it up and construed Shapiro’s tweet in the most ridiculous and bad faith way possible.

On Twitter, a left-wing journalist basically called Shapiro an overt racist, then insinuated that it was problematic Georgetown even hired him.

The full-on mob was on, and calls to have Shapiro fired mounted.

Nate Hochman at National Review did a great job of covering the blow-by-blow at Georgetown.

Georgetown Law Dean William Treanor basically just took the bad faith reading of Shapiro’s tweet at face value and called it “appalling” in a letter to faculty and students. Treanor denounced the “suggestion that the best Supreme Court nominee could not be a black woman,” even though Shapiro never made that contention.

Even this wasn’t good enough for the student activists on campus who demanded Shapiro be fired. They held a “sit in” on campus that Treanor attended. During the back and forth between what seemed to only be a handful of student activists and the dean, one student demanded that the school create a safe space to cry in.

“It is really hard to walk out of class or a meeting in tears, and you should always have a place on campus where you can go … reach out to me anytime — anytime — and we will find you space,” Mitch Bailin, dean of students, said.

It’s more than a little ridiculous that students at one of the premier law schools in the country needed a crying space because of a tweet they didn’t like. Right?

Many took this as a sign of how college students are snowflakes and that they are surely in for a harsh awakening when they meet the real world. But we are in a brave, new world now.

Sobbing and claims to victimhood can, in modern American discourse, shut down debate as quickly as a well-timed punch.

College campus culture, for decades, has cultivated an environment in which being of an oppressed group is a mark of distinction and worthiness. “Lived experience” matters far more than reason or truth.

As of this article’s publishing, Shapiro’s been put on administrative leave. All because of a clumsily worded tweet, a dishonest media campaign, a handful of student activists, and a cowardly school administration.

What’s remarkable about this scenario is how unremarkable it is. For anyone paying attention in the last few years—especially to what’s been happening on college campuses—this process is entirely familiar.

The Georgetown Law School dean’s embarrassing pleading with and ultimately buckling to the Georgetown Law sit-in activists is a microcosm of what’s happening in institutions all over the country.

The managerial revolution has gone woke. The managers, the people who control the direction of schools, media organizations, multinational corporations, and government bureaucracy, have all been raised and educated in an environment where these are the rules of the game.

The students who want to destroy Shapiro and demand safe spaces to sob in are future human resource managers and diversity, equity, and inclusion consultants. They hold power as the left-wing inquisitors of our institutions.

They know the rules of the game and understand that the way to wield power in this new system is not through great skill or the art of persuasion, it’s through intimidating people with accusations of racism or other labels that will make them unemployable and unpersoned by the institutions that now operate in lock step.

Unless Americans as a whole plant their flag and cease to be intimidated and cowed by these fanatical cry-bullies, we will over time fall into tyranny and lose our most precious rights to free speech and free thought. Every institution, public and private, will enforce their rules and bow to their demands.

The campaign to destroy Shapiro was not just about a badly worded tweet. It was part of a larger effort to silence any shred of intellectual diversity. All are welcome in the cult of diversity, equity, and inclusion as long as they all agree and obey.

Anyone even vaguely on the “right” or who simply questions any element of the left’s fast-changing narrative is under suspicion, whether a Georgetown professor, a podcast host, or really anyone who dares to speak their opinion in a public or private setting. The institutional left will use the slightest misstep, the slightest opening to destroy those they disagree with using those powerful institutions that now obey them without question.

Whether it’s Georgetown Law or The New York Times or a massive Fortune 500 company, we’ve seen time and time again that these institutions essentially obey the dictates of the most extreme and militant voices.

What’s deemed acceptable debate in elite circles is becoming smaller and smaller, and the consequences for wrongspeak will become greater and greater. All of us will eventually be forced to conform unless we see this transformation of American life as unacceptable, refuse to give in to the absurd demands of unreasonable activists, and support the institutions that won’t play by the woke ruleset.