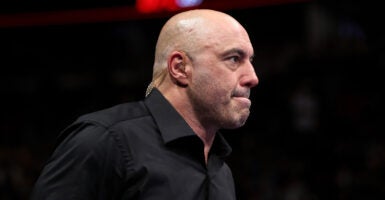 "The problem I have with the term misinformation, especially today, is that many of the things that we thought of as misinformation just a short while ago are now accepted as fact," says Joe Rogan, pictured at the UFC 225: Whittaker v Romero 2 event on June 9, 2018, in Chicago. (Photo: Dylan Buell/Getty Images)

If you were to conjure an archnemesis for leftists, you probably wouldn’t think it would be Joe Rogan.

After all, Rogan, who hosts an insanely popular podcast, is hardly some Ronald Reagan or Rush Limbaugh clone. He endorsed Bernie Sanders for president in 2020. He openly talks about using marijuana.

And while he seems to think it’s a little unfair for biological women to have to compete against biological males in women’s sports, Rogan otherwise appears to hold the usual liberal pro-LGBT views.

The comedian also has a long track record in Hollywood—not exactly a safe space for conservatives—due to his career as a “Fear Factor” host, among other gigs.

But apparently none of that is enough to offset his fatal flaw: Rogan is interested in finding out what’s true.

Now, for the crime of talking to those who don’t endorse “right think” on COVID-19, Rogan, whose podcast “The Joe Rogan Experience” reportedly averages around 11 million listeners, is apparently unfit for polite society.

Singer-songwriter Neil Young, who apparently missed the memo that rock ’n’ roll is about fighting The Man and not helping The Man squash others, said either Rogan’s podcast was kicked off Spotify, the platform that exclusively hosts Rogan, or he wanted his music off.

But others, seeking to prove their leftist bona fides, jumped on Young’s bandwagon. Fellow singer-songwriter Joni Mitchell also demanded her songs be removed, and Brene Brown, a popular researcher and author who has two exclusive podcasts with Spotify, announced she wouldn’t be releasing new episodes “until further notice.”

Prince Harry and Meghan, duchess of Sussex, who have a Spotify deal that thus far has resulted in one podcast episode in 2020, also wrung their hands, with a spokesperson for their foundation agonizing over the “all too real consequences of COVID-19 misinformation on [the Spotify] platform.”

So what, you ask, is Rogan doing? Is he saying that taking a COVID-19 vaccine will reduce your lifespan by 10 years? Is he claiming that COVID-19 hasn’t killed anyone? Is he advocating COVID-19 patients be sent to nursing homes to infect other elderly people? (Oh whoops, sorry, that last one was former New York Gov. Andrew Cuomo.)

In recent weeks, Rogan has hosted doctors Peter McCullough and Robert Malone on his podcast. But as Rogan notes in a video he posted to Instagram on Sunday, both men, while perhaps wrong on certain matters, are hardly random idiots ranting about something they can’t comprehend.

Furthermore, if we’ve learned anything in the past two years, it’s that the science is so not settled when it comes to COVID-19. As my colleague Mary Margaret Olohan ably documented, plenty of claims made by the “right people” about COVID-19 ended up being untrue in the long run:

Or as Rogan himself says in his Instagram video: “The problem I have with the term misinformation, especially today, is that many of the things that we thought of as misinformation just a short while ago are now accepted as fact.”

Like, for instance, eight months ago, if you said, ‘If you get vaccinated, you can still catch COVID and you can still spread COVID,’ you’d be removed from social media—they would, they would ban you from certain platforms. Now, that’s accepted as fact.

If you said, ‘I don’t think cloth masks work,’ you would be banned from social media. Now that’s openly and repeatedly stated on CNN.

If you said, ‘I think it’s possible that COVID-19 came from a lab,’ you’d be banned from many social media platforms. Now that’s on the cover of Newsweek.

Spotify and Rogan have agreed to start slapping a disclaimer on certain COVID-19 episodes he does, telling the listener to talk to their own doctor and advising if the interviewee holds controversial views.

It’s a disappointing concession. Where is the pressure for CNN to have disclaimers? What about advisories before Fauci interviews? (Plus: If the real goal here is to persuade more people to get a COVID-19 vaccine, you’re more likely to achieve that by engaging in open debate, not by silencing alternative views.)

But it’s certainly better than Spotify deplatforming Rogan. There are already too many examples of Big Tech censorship, whether it’s Twitter and Facebook banning President Donald Trump or Amazon refusing to sell Ryan T. Anderson’s book on transgenderism.

I’ve dabbled in listening to Rogan’s podcast over the past couple years or so. It’s not without its irritations: I could do without ever hearing Rogan talk about the theory of comedy again, and it’s clear his live-and-let-live notions of morality don’t really jibe with my own views.

But here’s what I do appreciate about the podcast: Rogan is a true journalist. He’s skeptical, he’s questioning. In his long episodes, he’s clearly thinking out loud at points.

He asks his producer, who he refers to as “Young Jamie,”  to fact-check certain claims in real time.  And in a world where everyone, from the politicians to the person who needs a job to support his family, is terrified of being canceled, Rogan is hosting long, wide-ranging interviews where people are talking seriously, frankly, and honestly.

That’s a real risk to take, for both Rogan and his guests.

It’s an act of courage—and it’s something that threatens leftists everywhere. Because if people are allowed to think freely, they won’t embrace leftism.

“I’m just a person who sits down and talks to people and has conversations with them,” Rogan says on Instagram, adding: “Whenever I get something wrong, I try to correct it because I’m interested in telling the truth.”

The fact that those views make Rogan an archvillain doesn’t say anything new about the left.  But it does say something very troubling about the state of our country in 2022.