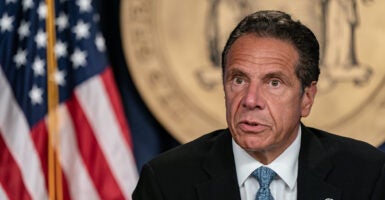 Over 9,000 hospital patients recovering from COVID-19 were released into New York nursing homes during the early stages of the pandemic due to a directive from Democratic Gov. Andrew Cuomo’s administration, according to a report Thursday.

The Associated Press obtained records showing that 9,056 COVID-19-positive patients were sent to New York nursing homes after the Cuomo administration’s March 25 directive, a figure more than 40% higher than what the state Department of Health had previously disclosed.

The revelation comes after New York Attorney General Letitia James reported in late January that at least 4,000 nursing home residents died after the directive was issued, forcing nursing homes to accept residents who had previously been diagnosed with the virus while also barring the facilities from obtaining negative tests from patients before their admission.

“While additional data and analysis would be required to ascertain the effect of such admissions in individual facilities, these admissions may have contributed to increased risk of nursing home resident infection, and subsequent fatalities,” James said.

The Cuomo administration rescinded the policy in May following outcry from experts who said it was leading to higher levels of COVID-19 deaths among New York nursing home residents.

The Cuomo administration also revealed in late January that at least 12,743 nursing home residents had died from COVID-19, a figure nearly 50% larger than the official tally at the time.

At the onset of the pandemic, New York reported all nursing home COVID-19 deaths regardless of whether the resident died at their facility or at a hospital.

However, around early May the state ceased reporting all nursing home COVID-19 deaths, The Daily Caller News Foundation previously reported. New York instead only reported nursing home residents who died from the virus while physically present at their facility, not at a hospital.

Cuomo then used the altered statistics to boast during press conferences that his state was handling COVID-19 in nursing homes better than other states with large outbreaks, which were reporting all nursing home COVID-19 deaths, regardless of where the resident died.

New York withheld the true number of nursing home COVID-19 deaths out of fear from federal prosecutors, according to a report Thursday from the New York Post.