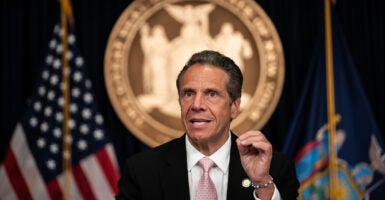 A top adviser for New York Gov. Andrew Cuomo lashed out Wednesday at a group of House Republicans after they called on the Justice Department to subpoena the Democrat following the release of a report that found the state undercounted coronavirus deaths among nursing home patients.

Seven Republicans from New York, led by Rep. Elise Stefanik, submitted a letter to the Justice Department seeking a subpoena to force Cuomo and his administration to hand over documents related to nursing home deaths, the New York Post reported.

Rich Azzopardi, a top adviser to Cuomo, responded to the letter in a statement to the Post, calling Stefanik a “QANON Trump puppet” and member of the “treason caucus.”

Azzopardi asserted that the Republicans “helped foment” the riots at the U.S. Capitol on Jan. 6, according to the Post.

“It’s a naked ploy and New Yorkers see right through it. Maybe someone should investigate what she and the rest of the Trump enablers knew about the organizing and planning of this riot,” Azzopardi said.

On Friday, New York Attorney General Tish James issued a report that said the Cuomo administration drastically undercounted the number of nursing home patients who died from the coronavirus.

The report also said an order that Cuomo implemented on March 25 led to an “increased risk of harm” to nursing home residences.

Cuomo’s guidance, which he revoked under pressure in May, required nursing homes to accept residents from hospitals even if they tested positive for the virus.

“The report [from James] reveals that Governor Cuomo and his staff recklessly and knowingly underreported the number of nursing home deaths that occurred after his March Executive Order requiring nursing homes to accept COVID-19 patients,” the House Republicans wrote to Monty Wilkinson, the acting U.S. attorney general.

The Republicans asked Wilkinson to subpoena Cuomo, his secretary, the New York state commissioner of health, and his staff for “all documentation and communications related to their nursing home policies during the COVID-19 pandemic.”

“Look at the basic facts where New York is versus other states,” Cuomo said in a press conference in August, The Associated Press reported. “You look at where New York is as a percentage of nursing home deaths, it’s all the way at the bottom of the list.”