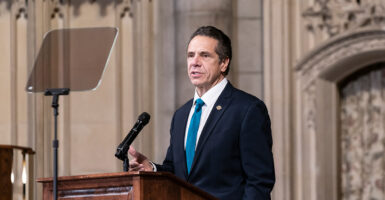 “Yes, @NYGovCuomo sexually harassed me for years,” Boylan tweeted Sunday morning. “Many saw it, and watched. I could never anticipate what to expect: would I be grilled on my work (which was very good) or harassed about my looks. Or would it be both in the same conversation?”

“Not knowing what to expect what’s the most upsetting part aside from knowing that no one would do a damn thing even when they saw it,” Boylan tweeted. “No one. And I *know* I am not the only woman.”

Cuomo denied the allegations in a Monday statement to The Daily Caller News Foundation.

New York Gov. Cuomo is asked about his former aide accusing him of sexual harassment over the weekend:

“It’s not true… I fought for and I believe a woman has the right to come forward and express her opinion and express issues and concerns that she has but it’s just not true.” pic.twitter.com/TnsdrC6Cvi

Boylan has not provided additional details about the alleged sexual harassment and has not returned multiple requests for comment from The Daily Caller News Foundation. She also accused Cuomo’s office of having a “toxic” work environment in December.

The former adviser worked for the Cuomo administration from March 2015 until October 2018, according to the New York Post. She is running for Manhattan borough president.