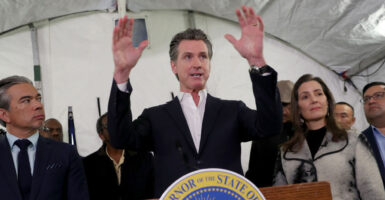 After locking down California with all sorts of onerous coronavirus restrictions, Gov. Gavin Newsom went to a private party at French Laundry with a bunch of his lobbyist friends. They wore no masks, sitting in close quarters. Pictured: Newsom speaks at a press conference on homelessness in Oakland, California, Jan. 16, 2020. (Photo: Jane Tyska/Digital First Media/East Bay Times/Getty Images)

One of the most memorable scenes in the “Hunger Games” books and movies is when the poor kids from the outer districts take the train into the glimmering capital.

There they see affluence and decadence completely foreign to them in their poor, hyper-regulated homelands. It’s all fiction, of course, but it’s not too far from what we are actually seeing in coronavirus-ridden America 2020.

In case after case, we are seeing public officials completely flout the rules they are imposing on their own constituents. It’s never been clearer that we are devolving into some sort of tiered society with different laws and regulations depending on your station in life.

Politicians and top business executives can fly around on private planes, book private dinners, and continue with their lives, while regular Americans see stricter and stricter lockdowns and mandates.

French Laundry was for years heralded as America’s finest restaurant. A fixed-price dinner starts at $300 per person and can easily hit $1,000 per person with wine pairings.

After locking down his state with all sorts of onerous coronavirus restrictions, including asking Californians to scale back family Thanksgiving celebrations, California Gov. Gavin Newsom went to a private party at French Laundry with a bunch of his lobbyist friends. They wore no masks, sitting in close quarters.

To his credit, he immediately apologized after he was caught, calling it a “bad mistake.” He also insisted that the dinner was outdoors and therefore less of a COVID-19 violation.

Later, pictures and witness accounts made it clear that his dinner was, in fact, indoors and that the huge sliding door that Newsom was apparently basing his “outdoor” claim on was closed for much of the meal while his party dined inside behind it.

Newsom isn’t the only leader rubbing hypocrisy in constituents’ noses. House Speaker Nancy Pelosi was famously caught in a hair salon in her hometown of San Francisco at a time when salons were ordered closed by the city.

This is not a partisan matter, either. About 20 different lawmakers from numerous states, many of them Republicans, just flew down to a luxury resort in Hawaii, even though many of the states in question prohibit such travel for their citizens.

The mayor of Washington, D.C., traveled to Delaware in violation of her own quarantine in order to attend Joe Biden’s celebration. When called out, she said her party travel was allowed because it qualifies as “essential travel.”

The problem is not that the behavior of these politicians is so outrageous in the first place. A ton of it is totally normal stuff. Pelosi probably needed a haircut. But so do the rest of us.

The reality is it’s hard to stay completely locked down for too long. People can do it for a few weeks, but when that stretches into months or even years, it’s just not going to work.

The politicians’ own hypocritical behavior proves it’s too long to ask of America. Yet their policies don’t reflect that simple reality.

A better route would be for politicians to be more transparent about what they are doing and what they know or don’t know about this disease. It’s hard to forget that the very first broad public health communication about the coronavirus was a lie.

The surgeon general, Anthony Fauci, and many others told us we don’t need to wear masks and that masks may, in fact, be bad. They never believed that. They said it because they wanted to save the masks for medical personnel who may need them more.

That’s a reasonable goal, but the fact that our leaders thought it was a good idea to start their pandemic response with a huge lie tells you a lot about the attitude we are facing.

I have now driven across our country twice during the pandemic. The assumption that nobody will wear a mask unless it’s mandated is just not true. I’ve seen heavy mask-wearing in red states with no mandate.

In fact, though mask use started off low, likely, in part, due to the government lying about them, recent studies show that use went up to 80% by the summer and has stayed there since.

This indicates that many people wear masks not because of mandates but because they think it’s a good idea. Imagine that. Imagine if the government spent more time explaining why masks are helpful (most people still don’t understand that).

If our country doesn’t fall out of its current tailspin, where nobody believes anything and political disagreement has morphed into pure hatred and even violence, the COVID-19 mask may go down as the biggest symbol of our failure.

On one extreme, people think masks are a liberty issue and nobody can tell them to wear one anywhere—even though this is a communicable disease, and masks are proven to help contain the spread.

On the other extreme are the lunatics driving around alone in their cars all masked up and just itching to yell at anyone not following their almighty protocols.

The predictable result of all this posturing, hypocrisy, and craziness is nobody believes anything anymore. They see President Donald Trump almost never wear a mask and see former Vice President Joe Biden wear one everywhere, even when it’s totally unnecessary, and they get the real message: This is all just political posturing.

If you wanted to design a system to convince people nothing really matters and that nobody is telling the truth, you would be hard pressed to beat what we’ve had going now for months. All this, sadly, is yet another sign of a society that’s fundamentally broken.