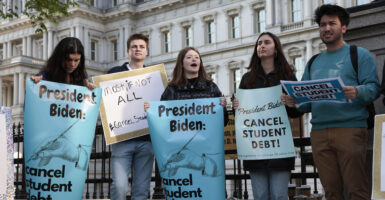 Activists hold signs at a rally in support of student loan forgiveness near the White House on April 27. (Photo: Anna Moneymaker/Getty Images)

Democrats are calling for more redistribution of wealth—this time for the benefit of their Ivy League-educated elites.

The COVID-19 pandemic and continual government-imposed lockdowns upended our way of life. Many Americans found themselves unemployed or in financial trouble. Now, inflation is eating away at everyone’s wealth, making us all poorer.

Large swaths of Americans are hurting, but whose needs are being prioritized?

Apparently, the Biden administration wants to prioritize what amounts to welfare for the upper class.

In September, leading Democrats in the Senate called on the executive branch to cancel up to $50,000 in federal student loan debt for each federal loan borrower. The president would do that through the Higher Education Act.

According to reports, the administration is again seriously considering a student loan bailout of some kind. It could be something along the lines of President Joe Biden’s campaign promise to bail out $10,000 per borrower, instead of $50,000.

Total student loan debt from more than 43 million borrowers adds up to about $1.7 trillion, according to recent estimates. Even a partial bailout—with the government essentially not collecting debts it’s owed—would be a substantial amount of money for a country already deep in debt, especially on the heels of a massive government spending spree.

Federal spending has been a problem for generations, and there’s a plenty of blame to go around, but Biden has made things worse, spending—and trying to spend—wildly since he took office more than 15 months ago.

If the administration were to go through with the bailout, it would almost certainly make our inflation crisis worse. But the Biden administration has few qualms about that.

In The Wall Street Journal, journalist Zaid Jilani wrote that the student loan bailout amounted to a “brahmin bailout,” in which  the Democratic Party’s well-to-do elite would benefit—and everyone else would pay.

It’s like a re-creation of the aristocracy of the Old World, where a special, privileged class of people receives money from the government simply by virtue of being in that class.

“Federal student loans were established as part of the Great Society to help low-income students,” The Wall Street Journal editorial board wrote.

Yet step by step, Democrats have turned student loans into an entitlement for academia and the affluent. Rather than make college free on the front end—which might have failed to pass Congress—they want to waive the costs at the back end.

Higher education is the cornerstone of left-wing cultural power and influence tied to all other institutions that have gone woke. Democrats are desperate to keep the gravy train going at the expense of the rest of society, despite its cost and the fundamental unfairness of a taxpayer-funded bailout.

Despite what the left insists, the student loan bailout would be a regressive policy.

The top quintile of households hold $3 in student loans for every $1 held by the bottom fifth of the economic spectrum. A huge amount of the debt is held by graduate students.

Furthermore, thinking of this as simply a measure to bail out college graduates—whatever the merits thereof—would be incorrect. A student loan bailout is really a bailout of higher education itself.

Why should the American taxpayer be expected to pick up the bill for sky-high student loan debt when colleges and universities are sitting on a mountain of endowments?

Meanwhile, in the past few decades, the cost of higher education has exploded. National Review’s Arjun Singh reported:

This is nearly five times the increase in the rate of inflation in that period.

During that time there has been an explosion in administrative bloat, much of it focused on promoting “diversity, equity, and inclusion,” rather than teaching or research.

Many of these schools received a combined total of billions of dollars from Congress during the COVID-19 pandemic. Effectively bailing these schools out—which is what student loan forgiveness ultimately amounts to—allows them to continue their fiscally reckless policies.

They will sit on their endowments, expand more, spend more, and ask for more. One bailout will lead to another, and another.

Young Americans get sold a bill of goods thinking that it’s necessary to pile up college debt because it will eventually pay off. That’s clearly not always the case.

It’s lamentable that millions get stuck with debt, but it’s even more unfair to saddle those who never even went to college—and those who already paid off their own student debts—with footing the bill.