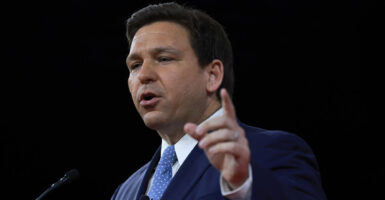 “[Parents] do not want their first graders to go and be told that they can choose an opposite gender,” Florida Gov. Ron DeSantis says. Pictured: DeSantis speaks at the Conservative Political Action Conference Feb. 24, 2022, in Orlando, Florida. (Photo: Joe Raedle/Getty Images)

Florida Gov. Ron DeSantis criticized Disney for its opposition to the state’s parental rights legislation in a video shared by Fox News on Thursday.

“When you have companies that have made a fortune off being family-friendly and catering to families and young kids, they should understand that parents of young kids do not want this injected into their kid’s kindergarten classroom,” DeSantis said in the video. “They do not want their first graders to go and be told that they can choose an opposite gender.”

“If that’s the hill they’re [Disney] gonna die on, how do they possibly explain lining their pockets with their relationship from the Communist Party of China?” he added. “Because that’s what they do, and they make a fortune, and they don’t say a word about the really brutal practices that you see over there at the hands of the CCP.”

In a video exclusively obtained by @FoxNews Digital. @GovRonDeSantis slams #Disney saying “In Florida, our policies got to be based on the best interest of Florida citizens, not on the musing of woke corporations.” pic.twitter.com/Op87xgsLzB

Disney’s CEO expressed his disappointment with the legislation, which critics call the “Don’t Say Gay” bill, in a call with DeSantis Wednesday after he claimed Disney had been “working behind the scenes directly with lawmakers on both sides of the aisle” to oppose the bill in a virtual shareholder meeting, according to The New York Times.

?Gov. DeSantis on Disney: “How do they possibly explain lining their pockets with their relationship from the Communist Party of China? Because that’s what they do, and they make a fortune, and they don’t say a word about the really brutal practices at the hands of the CCP.”

The bill was passed in the state Legislature Tuesday, and it awaits DeSantis’ signature.

“Our policy’s got to be based on the best interests of Florida citizens, not on the musings of woke corporations,” DeSantis said.

Disney did not immediately respond to the Daily Caller News Foundation’s request for comment.