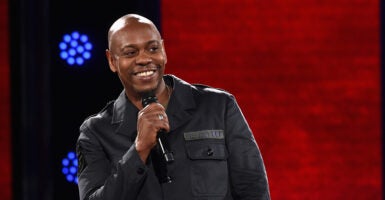 Provocative comedian Dave Chappelle is in hot water again. His new Netflix special "The Closer" has been the subject of numerous articles accusing Chappelle of transphobia and homophobia. (Photo: Lester Cohen/WireImage via Getty Images)

The controversy began after his latest special “The Closer” aired on Netflix. Chappelle, with his usual brand of acerbic humor, made a series of jokes that ran afoul of transgender ideology.

Chappelle is no stranger to controversy. His 2019 special “Sticks & Stones” faced similar accusations of transphobia from a vindictive press.

One topic that Chappelle joked about in “The Closer” was the outrage directed at “Harry Potter” author J.K. Rowling.

“They canceled J.K. Rowling—my God. Effectively, she said gender was a fact, the trans community got mad as s—, they started calling her a TERF,” said the comedian.

TERF stands for “trans exclusionary radical feminist” and is used as a pejorative against feminists who don’t think biological men are women.

Cue the outrage. Articles spewed forth from the font of regularly aggrieved leftist journalists, including a loaded headline from NPR reading, “For Dave Chappelle, Punchlines Are Dares. His New Special, ‘The Closer,’ Goes too Far.”

Not to be outdone, The Independent ran a piece titled “Meet the New Dave Chappelle—Misogynistic, Anti-Trans and Socially Irresponsible.”

The hit pieces against Chappelle continued as the story developed. “Netflix Defends Dave Chappelle’s Anti-Trans Remarks and Suspends a Trans Employee,” reported Time after Netflix CEO Ted Sarandos initially defended Chappelle and the special and the company suspended Terra Field, a biological man who identifies as a woman, along with two other employees for barging into an executive-level meeting in order to complain about the “The Closer.”

Notably, Sarandos has since caved to the pressure, saying he “screwed up” in his preliminary response to the outrage. However, the special remains on Netflix.

But for all of those news outlets writing on this “uproar,” there appears to be more demand for outrage than can be provided naturally.

Stephen Miller, a contributor with The Spectator, noted, “The story cites 3 tweets, one from an account they call ‘a Twitter user’ with 200 followers. If a news story simply cites you as ‘one twitter user said..’ your opinion isn’t newsworthy. It’s irrelevant. Facebook is not the problem.”

The media are so desperate for oxygen to keep the Chappelle controversy alive, they’re soliciting actor Channing Tatum’s thoughts on it.

Twitter is not indicative of real life. According to a 2020 Pew Research Center report, “just 10% of users produced 92% of all tweets from U.S. adults since last November, and that 69% of these highly prolific users identify as Democrats or Democratic-leaning independents.”

That is an obscenely small number of people driving cultural narratives like the Dave Chappelle story. But it also indicates that the narrative itself is being propped up by a group that doesn’t represent the average American, who likely either agrees with Chappelle or couldn’t care less.

June Gallup polling indicates that 30% of Americans identify as socially conservative, while 35% identify as moderate. That’s a far cry from a majority who buy into the radical left’s demands for progressive orthodoxy.

Chappelle himself said it best during “The Closer,” “When ‘Sticks & Stones’ came out, a lot of people in the trans community were furious with me and apparently they dragged me on Twitter. I don’t give a —- cuz Twitter’s not a real place!”

The sooner people stop giving unrepresentative Twitter mobs the time of day, the sooner they lose their monopoly on the narrative.