Why the Left Wants Twitter Over Tolstoy in Our Schools 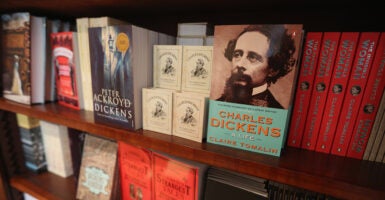 The human experience cannot be boiled down into 280-character tweets. Instead, children should learn through reading literature. Pictured: Books by, or relating to, Charles Dickens for sale inside the Charles Dickens Museum Dec. 7, 2012, in London. (Photo: Oli Scarff/Getty Images)

If one leftist teachers group gets its way, reading literature in school will be replaced by reading internet memes and Twitter posts.

A powerful group of educators called the National Council of Teachers of English recently released a statement calling on schools to “decenter book reading and essay writing as the pinnacles of English language arts education.”

To more thoroughly push its leftist ideology, of course.

The statement goes on to support critical pedagogies, referring to Marxist ideas, a la critical race theory. It reads,

Educators value the use of teaching and learning practices that help to identify and disrupt the inequalities of contemporary life, including structural racism, sexism, consumerism, and economic injustice. Critical pedagogies help learners see themselves as empowered change agents, able to imagine and build a better, more just world.

Founded in 1911, the National Council of Teachers of English boasts that it has 25,000 members across the country that receive its materials and recommendations. One English teacher in Massachusetts bragged about getting Homer’s epic poem “The Odyssey” removed from her school’s curriculum, while the journalists at NPR extoll listeners to “decolonize” their bookshelves.

For example, one recommendation reads that students should “examine the cultural, ideological, and sociolinguistic content of the curriculum and focus on the uses of literacy for social justice in marginalized and disenfranchised communities.”

Another recommendation pushes students to “examine mass communication, popular culture, and new technologies by analyzing relationships between media and audiences, information, and power, often with attention to media institutions and representations that address systemic inequalities and social justice.”

The rise of social media and increasing reliance the world has on technology represents an ever-evolving frontier in education. Kids today will need to be taught differently than generations that preceded them, and a focus on parsing online information should be included in a modern curriculum.

However, in their quest to eliminate any semblance of the old fact- and logic-based order, the left has decided that reading and writing must be sacrificed on the altar of memes and social media.

The council declares this in its statement when it says, “We no longer live in a print-dominant, text-only world. We experience this reality daily in the GIFs and selfies we share with one another, the memes and videos we circulate through our social media feeds.”

Authors from times past still offer valuable lessons and insight into the human condition, and as a society, we suffer enormously when we replace them with quick quips from Twitter.

Indeed, it’s our obsession with reducing messages to sound bites and 280-character tweets that’s part of the cause of today’s moral rot. Distilling strong values and lessons about what it means to be good people and good citizens is impossible under such conditions.

Literature takes effort and skill to unpack, but the value is immeasurable.

It’s also important to learn actual media literacy, not just the twisted social justice-oriented media literacy being pushed by the National Council of Teachers of English. Students should be able to tell when an outlet is lying or stretching the truth and be able to parse between opinion and fact.

By eliminating classical literature from our education system, the left hopes to fill the gap with dogma and propaganda. It hopes to weaponize yet another angle of scholastic life.

We’ve already seen the dire consequences of the radical left’s long march through the school system. Allowing it to destroy yet another bulwark of classical education leaves America one step closer to total leftist dominance. Literature helps to repel that invasion.

As “Fahrenheit 451” author Ray Bradbury said, “You don’t have to burn books to destroy a culture. Just get people to stop reading them.”

With those words in mind, it’s essential for kids to keep on reading.