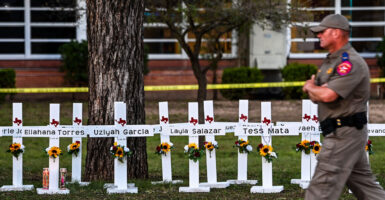 "Steve Bucci should be applauded for pointing out that the generalized solutions offered by politicians are designed only to bolster political agendas and won't solve the problem," reader Mike Aiken writes. Pictured: On May 26, a police officer walks past a makeshift memorial for the 19 children and two teachers killed by a gunman two days earlier at Robb Elementary School in Uvalde, Texas. (Photo: Chandan Khanna/AFP/Getty Images)

Editor’s note: This sampling of The Daily Signal’s mailbag features letters about the Texas school massacre, election reform, and the general state of America. Don’t forget to write to letters@dailysignal.com.—Ken McIntyre

Dear Daily Signal: I truly appreciate Virginia Allen’s article on school safety summarizing Heritage Foundation visiting fellow Steve Bucci’s well-informed, four-point plan to lessen the impact of school shootings such as the one May 24 in Uvalde, Texas (“4 Steps Every School Can Take to Help Prevent Shootings”).

Bucci should be applauded for pointing out that the generalized solutions offered by politicians, President Biden specifically, are designed only to bolster political agendas and won’t solve the problem.

The Second Amendment was designed to protect Americans from politicians who despise the right to bear arms and desire it eliminated.—Mike Aiken

Dear Daily Signal: I think Steven Bucci is right on about making schools safer and obviously knows his stuff. My only comment is that Texas, and I suspect other states, have passed legislation making funds available to school districts to do the very same things that Bucci recommends.

But my understanding is that most school districts did nothing to take advantage of such monies, thinking that “it can’t happen to us.”

The time has come to make these things mandatory. Our society is producing these crazed, mentally ill boys, usually with no father in the home, with increasing frequency. Until this country learns how to better identify them earlier, we’ve got to protect our children, even if it means impinging somewhat on someone’s civil rights or privacy.—Hugh Bartlett

Safety drills, a couple per year, are important at my children’s schools, from elementary to high school. They had different scenarios, with fire, storm, and danger the main “themes.”

Danger meant a shooter, of course, but the school didn’t say that. All staff and students had to participate, and the drill went the whole way. An alarm sounded and the PA announced that everyone should be “secure in the room.”

Sometimes local emergency services cooperated, and did a “show and tell” with the children afterward. It worked well.—David Green

Every time there is a mass shooting, the government starts crying for gun control and gun reform. Any mass shooting is a tragedy, but I have never seen my own weapons shoot without my assistance.

So how about throwing people who commit crimes in jail, even for the rest of their lives? Don’t give them plea deals, don’t give them anything. Law-abiding citizens protect their families and themselves. And bad people will kill with whatever they want to do so.

I wonder sometimes how the government would feel if all the Secret Service agents and others who protect them didn’t have weapons. According to the Constitution’s Second Amendment, I have a right to protect my family and myself.—John Allen

Barring firearms, a person bent on murder-suicide could use any imaginable means to accomplish his goal. The issue is the psychological problem, not the means.

Concentrating exclusively on firearms distracts from psychological problems, which should be addressed whether the individual kills someone or not.—Toby W.

I’m not defending the actions of the police officers in Uvalde, Texas. But we’ve demonized law enforcement to the point that there are far fewer rewards for being a hero, for taking risks.

We need more stories of citizens successfully stopping an active shooter. This would counter gun control advocates and show how many lives are saved through responsible gun use. Thank you for this article.—Debby Jones

Dear Daily Signal: I just read Victor Davis Hanson’s commentary headlined “Is Biden’s ‘Success’ Our Mess?” We conservative, sensible, practical lovers of America are so fortunate to have Mr. Hanson to articulate out ideas, our philosophy of government.

And thank you to The Daily Signal for bringing his essays and other wonderful content to us.—Elizabeth Corr

It’s so good to see Victor Davis Hanson point out what many Americans don’t see or understand, and that is that liberals today have one goal: to destroy America as we know it. All the institutions, lifestyles, religion, families, and all the rest.

These people’s ideology, as Rush Limbaugh used to say, has to be destroyed. Not just pushed back, but literally destroyed, because it is evil. Thank you, Mr. Hanson.—M. Cancienne

I agree with Hanson’s assessment, with one exception. He refers to all of this as President Biden’s agenda and doesn’t point to the real control behind the president, including Biden’s former boss’ “third” term and all his supporters in the media, Wall Street, Big Tech, unions, activists, academia, foreign adversaries, nonelected officials, etc.

Some of these institutions openly cheer Biden along; many others skirt the law to make sure the agenda is carried out. Their playbook is right out of history and one needs not travel too far back to read it. Unfortunately, our educators are too focused on indoctrination over teaching history.

America, wake up. Voting matters, and it’s not about who you prefer to invite to a dinner party, but rather what policies best fit our foundation rather than the failed policies of the past.—Michael Lewis

Dear Daily Signal: Jarrett Stepman’s commentary article is a good example of bringing forth the truth to expose the lies (“Record Voter Turnout in Georgia Primary Elections Debunks ‘Jim Crow 2.0’ Nonsense”). Clearly, Democrats rely upon lies as a strategy for fearmongering the uninformed public. The best response is truth.

More important is a coordinated effort to bring the truth to more than just Heritage Foundation members and followers. The truth widely disseminated is the best response to Democrats’ lies.

If the truth is not known widely, the lies become ingrained in the minds tricked by the lies in the first place.—J.R. Holt

Dear Daily Signal: I appreciate the commentary on illegal voting by Hans von Spakovsky and Katie Samalis-Aldrich (“Latest Cases of Election Fraud Underline Need for Vigilance and Action”), but it raises a question in my mind. Are the media again doing their job—that is, hiding these situations?

The writers described several cases of individuals who fraudulently voted twice, which isn’t as big news as, for example, what is described in Dinesh D’Souza’s documentary film “2,000 Mules.”

Yet if these individual frauds and the penalties for them were widely published in the media, surely that would lead to discouragement of others who might consider the same tactics.—Gary Heyer, Skaneateles, N.Y.

The Heritage Foundation’s Election Fraud Database is a great idea and a valuable asset. What strikes me in the article by von Spakovsky and Samalis-Aldrich is the severity of the penalties imposed on what I would view as retail voter fraud, especially when viewed in the context of the wholesale criminality of the election fraud exposed in the documentary “2,000 Mules.”

We may have to wait for justice in the election fraud category, but if it is not served, this country will no longer be free.

Can we count on Heritage and The Daily Signal to follow the big picture fraud as well as you’re doing with the individual transgressors?—Bill Davies

Editor’s note: The Heritage Foundation’s Election Fraud Database includes only proven cases of fraud as reflected in court records, not alleged voter fraud as is presented in the documentary film “2,000 Mules.”

However, the film features an interview with Hans von Spakovsky, a senior legal fellow at Heritage and manager of its Election Law Reform Initiative. In addition, von Spakovsky has written about the film and you may read that article here.

It’s nice to see The Daily Signal covering what you call the latest cases of election fraud.

It puzzles me, however, that the commentary by von Spakovsky and Samalis-Aldrich mentions the case of a daughter voting on behalf of her deceased mother while failing entirely to mention the far more egregious case of thousands of paid, organized criminals voting multiple times, as documented in Dinesh D’Souza’s current film, “2,000 Mules.”

Is it possible that you are not aware of this compelling documentary? Or are the implications of what D’Souza’s film establishes incontrovertibly too disturbing?—Samuel Hilt, Petaluma, Calif.

Editor’s note: Thanks, Samuel. See the note after the letter above about “2,000 Mules.”

I have thought for years how election fraud could be taken care of by the use of computers, checking to see whether someone votes in more than one state or votes for a deceased person.

However, we would always need to be one step ahead of the hackers. There has to be a way to keep the cheating in check.— Catherine Firor Hogan, Hayesville, N.C.

I don’t recall anyone suggesting widespread fraud. I do know there is evidence of targeted fraud. That is, targeted to change just a few votes. The news media needs to be taken to task for their consistent lies.

Thanks for the article. Perhaps it will educate some percentage of those who normally don’t get the truth from their news media.—Ron Spencer, Pittsboro, N.C.

It is awful that the article on voter fraud cases by Samalis-Aldrich and von Spakovsky mentions the party affiliation only for two Republicans caught and convicted.

What about the party affiliations of the people in the other cases? Why no mention of those?—Linda Jonckheere, Corpus Christi, Texas

Editor’s note: Linda, in addition to listing only proven cases of voter fraud, The Heritage Foundation’s Election Fraud Database includes the party registration of a convicted offender only when it is available from official accounts. If party registration isn’t there, Hans von Spakovsky tells us, it couldn’t be determined.

Dear Daily Signal: I very much like what you are doing. I really appreciate the headlines in the daily emails and the detailed coverage of topics that tells me what I want to know. Thank you for providing this source. Well done.—Mel Lyda, Oregon

Thank you for informative articles. Keep up the good work.—Thomas Fugate