‘Able to Be Heard’: Coach Fired for Praying Gets His Day at Supreme Court 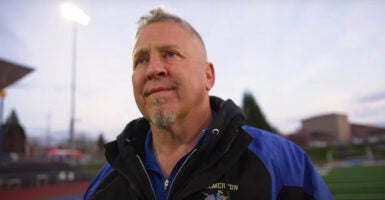 “I had a covenant with God from the very beginning when I accepted the job that I would give him the credit and thank him after every game, win or lose,” coach Joe Kennedy told The Daily Signal. (Photo: The Daily Signal)

Both legal teams prepared and presented their arguments Monday, and now it is up to the Supreme Court to rule fair play or foul in the case of coach Joe Kennedy.

“It really does mean a lot to me just being able to be heard [on] the facts of the case,” Kennedy told reporters outside the Supreme Court following arguments in his case.

After a seven-year legal battle, Kennedy, 52, says it has been a “long haul,” but that he is optimistic the high court “will rule [on] exactly what the facts are and apply the law without any of the biases out there.”

The Supreme Court agreed to hear the case of Kennedy v. Bremerton School District in January. It centers around the First Amendment issue of whether a public school employee, such as a football coach, may pray in view of students.

In 2015, Kennedy lost his job as an assistant football coach at Bremerton High School, a public school about 30 miles west of Seattle, after taking a knee in prayer on the 50-yard line after games.

From the time the Marine veteran was hired as a Bremerton High coach in 2008, he made it his practice to thank God in the center of the field after every game.

“I had a covenant with God from the very beginning when I accepted the job that I would give him the credit and thank him after every game, win or lose,” Kennedy told The Daily Signal during an exclusive interview last month in Bremerton.

Over time, some players began joining Kennedy in prayer after games. When the Bremerton School District learned about the practice, it asked Kennedy to stop praying with players. Kennedy agreed, and told The Daily Signal that he “never prayed with the kids ever again.”

Kennedy continued to take a knee in prayer by himself on the 50-yard line after games. The school district then told him that he no longer could pray in view of students and game attendees, but Kennedy kept praying.

“When they told me that, I had to pick between my faith and my job, that was a no-brainer, and I stood up and fought,” Kennedy told The Daily SIgnal in the earlier interview.

The Bremerton School District placed Kennedy on administrative leave, then didn’t renew his contract for the following season. The coach decided to take legal action.

Kennedy filed a lawsuit against the Bremerton School District, and his case has risen through the courts over the past seven football seasons.

When the 9th Circuit Court of Appeals ruled in favor of the school district, Kennedy and his attorneys with First Liberty, a nationwide legal organization protecting religious liberty, appealed to the Supreme Court. The nine justices heard arguments Monday.

Government employees “still have a right to live their life,” Kelly Shackelford, chief counsel, president, and CEO of First Liberty, told The Daily Signal outside the Supreme Court after arguments concluded. “They can go to church, they can speak, they can pray, and we should never allow the government to punish them for doing that.”

Kennedy “loves coaching above all else,” Clement said, “and to sacrifice that for the last six or seven years has been a great personal sacrifice. But it was a necessary personal sacrifice in order to vindicate his constitutional right to engage in religious exercise and free speech.”

Richard Katskee, an attorney who is vice president and legal director of Americans United for the Separation of Church and State, represented Bremerton School District before the high court. Katskee argued that the district acted constitutionally.

“The public school district here did what schools everywhere should do: It respected the rights and religious freedom of all its students,” Katskee told The Daily Signal.

“Schools are supposed to be open, welcoming environments for people, regardless of faith or belief,” Katskee said.

The Bremerton School District, he said, acted “to make sure that children weren’t coerced to practice a religion that’s against their own conscience or their parents’ beliefs.”

The Supreme Court is expected to announce its ruling in the case sometime in June.

“I really feel like by the end of June,” Shackelford said, “the First Amendment, both free speech and free exercise [of religion], are going to be restored, not only for coach Kennedy, but for millions and millions of teachers and coaches across the country.”