After Being Punished for Praying, Football Coach Files Lawsuit to Get His Job Back 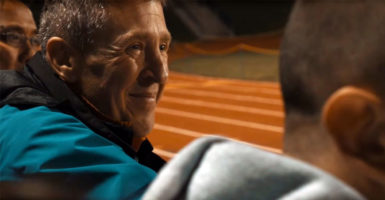 Suspended from participating in the Bremerton High School football program, coach Joe Kennedy was forced to sit on the sideline for the last game of the 2015-16 season. (Photo: Daily Signal/First Liberty Institute)

A high school football coach who lost his job after defying orders to stop praying at the 50-yard line today sued a school district in Washington state, alleging it violated his constitutional rights to religion and free speech.

The lawsuit comes on top of a complaint Joe Kennedy and his legal team filed with the Equal Employment Opportunity Commission in December, claiming the Bremerton School District discriminated against him based on his Christian beliefs.

The goal of the lawsuit, Kennedy told The Daily Signal on Tuesday after filing it, is to get his job back.

“I just want the ability to go back out there and help these young men, and also have my constitutional rights that I fought for in the Marine Corps for 20 years,” he said in a telephone interview. “That’s it—it’s pretty simple.”

“I just want the ability to go back out there and help these young men,” coach Joe Kennedy says.

Kennedy, 47, served on active duty in the Marines from 1988 to 2006. A resident of Port Orchard, Washington, he had been a football coach at Bremerton High School since 2008.

The school district in Bremerton, a city located west of Seattle, said it was complying with state and federal law when making the decision to place Kennedy on administrative leave. The school system later decided not to renew Kennedy’s coaching contract.

… the court held that a school district’s practice of simply allowing its facilities to be used for religious expression during a district sponsored football game violated the First Amendment’s Establishment Clause because of the reasonable perception by students and attendees of district endorsement of religion. That decision makes clear that students can pray on their own; but it is a constitutional violation of students’ rights for a district employee, acting as such, to initiate prayers with students.

“It is equally clear that district employees may not participate in even student-initiated prayer,” Bremerton school officials added, citing a 1995 case called Doe v. Duncanville Independent School District. “While attending games may be voluntary for most students, students required to be present by virtue of their participation in football or cheerleading will necessarily suffer a degree of coercion to participate in religious activity when their coaches lead or endorse it.”

But according to Kennedy and multiple students interviewed by The Daily Signal, the coach initially prayed alone until players asked if they could join him.

The school district backed up this claim, noting in its statement that “no student, parent, or member of the community ever complained about his private religious expression after football games.”

According to the lawsuit filed for Kennedy by First Liberty Institute, a conservative legal organization dedicated to protecting religious freedom, other coaches at Bremerton High School “have also engaged in religious expression.”

Assistant coach David Boynton, for example, “has engaged in a Buddhist chant near the 50-yard line at the conclusion of many BHS games,” and has continued to do so despite the suspension and firing of Kennedy, according to the suit.

Kennedy’s lawyer, Michael Berry, told The Daily Signal that the coach’s lawsuit was the next step after filing a complaint with the Equal Employment Opportunity Commission.

“We received a ‘right to sue’ letter from the [Equal Employment Opportunity Commission], so that’s why we’re at this stage now,” Berry said, adding that a “right to sue” letter doesn’t take a position on the merits of the case, but gives a green light to move forward.

Kennedy first applied for a religious accommodation, but the school district denied that request. After he defied orders and continued praying on the 50-yard line despite school officials warning him not to, the school district put Kennedy on administrative leave and banned him from participating in the football program “in any capacity.”

That forced Kennedy to watch the last game of the season, on “Senior Night,” from the sideline.

Since then, Kennedy told The Daily Signal, he’s “been in denial” about his situation with the Bremerton School District.

After the 2015-16 season ended, he said, “you just try to put [the situation] in the back corner somewhere, where you don’t even think about it.”

But now, with a new football season about to begin, Kennedy said he’s having a “tough time.”

“I see all the posts of all my guys … and I’m not part of it, it’s just, it leaves a hollow place inside your heart,” he said.

Kennedy requested a trial by jury in the U.S. District Court for the Western District of Washington Tacoma Division. The school district has 30 days to respond to the suit.

“We’re hopeful that they will recognize that they have done wrong and that they’ve violated the Constitution and federal law, and that they’ll quickly come to that realization and reinstate coach Kennedy,” Berry said.