2 Key Cases the Supreme Court Will Hear in April 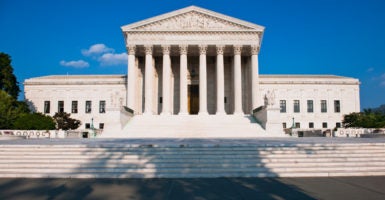 Thirteen oral arguments are scheduled at the Supreme Court over the next two weeks. (Photo: Tetra Images/Getty Images)

Conversations about the Supreme Court this spring have been dominated by discussion of conspiracy theories about Justice Ruth Bader Ginsburg’s health, Democratic presidential hopefuls’ plans to “pack the Supreme Court,” and a manufactured “controversy” over Justice Brett Kavanaugh teaching at George Mason University’s Scalia Law School.

But on Monday, the justices will begin their final argument sitting of the term, with 13 oral arguments scheduled over the next two weeks. Here are two cases to watch this month.

1. Whether the Term ‘FUCT’ Can Be Trademarked

In Iancu v. Brunetti, the justices will look at whether a federal law called the Lanham Act that prohibits registration of “immoral” or “scandalous” trademarks by the U.S. Patent and Trademark Office violates the First Amendment.

If this sounds familiar, that’s because the Supreme Court heard a similar case, Matal v. Tam, challenging the same law’s prohibition on “offensive” trademarks in 2017. The justices unanimously ruled for the challengers, an Asian-American band called the Slants, with Justice Samuel Alito declaring that the ban on “offensive” trademarks “offend[ed] a bedrock First Amendment principle: Speech may not be banned on the ground that it expresses ideas that offend.”

The case currently before the Supreme Court was brought by Erik Brunetti, who started a streetwear clothing brand that includes shirts and other items emblazoned with the term “FUCT” (which stands for “Friends U Can’t Trust”).

He applied for a trademark but the Patent Office denied his application because the term is “a phonetic twin” of and “past tense” of a vulgar word and is “therefore scandalous” in violation of the Lanham Act.

Brunetti appealed and the U.S. Court of Appeals for the Federal Circuit ruled in his favor, finding that the Lanham Act’s prohibition on “immoral” or “scandalous” trademarks is unconstitutional. The three-judge panel explained that the First Amendment protects “even private expression which is offensive to a substantial composite of the general public.”

The Supreme Court agreed to review the case, but it may be an uphill battle for the government in light of the trend of cases extending First Amendment protection for offensive or scandalous speech, such as burning crosses, animal “crush” videos, violent video games, lying about military honors, and the Westboro Baptist Church protesting military funerals, to name a few.

And anyone expecting to hear expletives fly during a Supreme Court oral argument may be disappointed: Brunetti promised in his brief, “It is not expected that it will be necessary to refer to vulgar terms during argument … ”

The Supreme Court will hear oral argument on Monday, April 15.

In Department of Commerce v. New York, the justices will consider the Trump administration’s attempt to add a citizenship question to the 2020 U.S. census.

The Enumeration Clause, Article I, Section 2, of the Constitution gives Congress broad discretion to conduct the census, and Congress has delegated that authority to the secretary of Commerce to “obtain such … census information as necessary.”

Commerce Secretary Wilbur Ross decided to reinstate a citizenship question on the 2020 census questionnaire—one that previously was asked “almost every decennial census” from 1820 to 1950.

Ross’ decision was quickly challenged in district courts in New York, California, and Maryland. The Southern District of New York enjoined the Commerce Department from adding the citizenship question to the 2020 census, finding that reinstatement of the question would violate both the Administrative Procedure Act and the Enumeration Clause.

The challengers argue that the inclusion of a citizenship question will stop millions of people from participating in the census for fear of what might happen if they answer candidly. Such fear, so the argument goes, will frustrate the purpose of the census and put people at risk of adverse immigration actions.

But federal law protects the confidentiality of census respondents and states that the secretary may not “disclose the information reported by, or on behalf of, any particular respondent.”

The challengers also claim that inclusion of the citizenship question is “arbitrary and capricious,” in violation of the Administrative Procedure Act, because Ross’ stated reasons were pretextual and masked other untoward purposes. In an otherwise low-profile Supreme Court term, this is one standout case that will likely garner a lot of media attention.

The Supreme Court will hear oral argument on Tuesday, April 23.

These are just two of the important cases the Supreme Court will hear in the final weeks of oral argument for its 2018-2019 term. Once oral arguments wrap up, the justices will begin issuing opinions in all of the remaining cases—including ones with big implications for the administrative state, congressional redistricting, and accommodation of religion in the public square. The Supreme Court should issue these decisions and many more by the end of June.