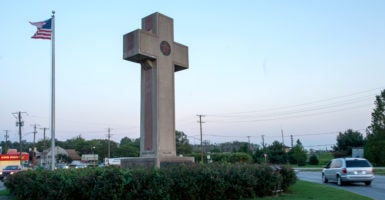 The Supreme Court heard oral argument Wednesday in a case challenging the constitutionality of a World War I memorial in Bladensburg, Maryland.

In American Legion v. American Humanist Association, the Supreme Court will weigh in on whether a state’s maintenance of a 93-year-old World War I memorial that includes a 40-foot cross—known as the Peace Cross—is an “establishment of religion” in violation of the First Amendment.

It was a packed house Wednesday at the Supreme Court, with three lawyers arguing on behalf of the Peace Cross’ constitutionality and a fourth arguing against. The justices came prepared with a lot of questions and at times talked over each other and the four advocates.

Here are six key exchanges from the oral argument.

1. What Message Does the Peace Cross Convey?

Katyal was the first up to the podium, and he got only a few sentences in before Justices Sonia Sotomayor and Elena Kagan jumped in, wanting to know more about the Peace Cross and its message.

Katyal explained that the American Legion’s symbol is featured prominently on the cross and there is no other religious content in the park where it sits. It’s located on a median within a busy traffic roundabout. This wasn’t always the case, but over the years, the roads around the Peace Cross were expanded, to the point that the state of Maryland became concerned about traffic safety and acquired the site from the American Legion.

The American Legion holds an annual event at the site on Veterans Day, and there have been no religious events held there.

Katyal noted that there’s a clear secular purpose for this monument, and that, indeed, one of the key initial fundraisers for the privately-funded cross was Jewish. He explained that there is a long tradition of using the cross to memorialize the soldiers who died in World War I. It was “the dominant image of the time, everything from [the field of Flanders] poem to art, to the war bond advertisements … to the 1924 congressional resolution.”

Kagan suggested that if a local government tried to put up a cross like this today, it would be problematic. She posed a hypothetical with five different kinds of crosses: a World War I memorial cross erected 93 years ago, a World War I memorial cross erected today, a generic war memorial cross, a cross memorializing those who died in some other kind of tragedy, and a cross that was unrelated to any war or tragedy and didn’t memorialize anyone. She wanted to know which of these crosses are permissible under the First Amendment’s establishment clause, and why.

Wall explained that the first four examples would most certainly be constitutional, and the fifth would depend on the purpose because context matters. He pointed to the Supreme Court’s 2014 ruling in Town of Greece v. Galloway, saying traditions that could be traced back to the founding era or those that posed no greater danger than what the Founders were concerned about should withstand constitutional scrutiny.

Wall pointed out that our nation has a long tradition of accommodating religious symbols, including crosses. Kagan retorted that the cross is the “pre-eminent symbol of Christianity,” but Wall noted that it has “a unique history to World War I” in memorializing those who died in service to our country.

Later in the argument, Miller was asked which crosses on public land should be allowed to stand. Justice Samuel Alito mentioned the Irish Brigade monument in Gettysburg. Miller answered: Only those in settings where the cross is akin to an artifact in a museum and the government acts “like a curator.”

She continued, “Is it too loud?” or does “the commemorative purpose predominate?”

>>> Related: Why the Peace Cross Case Represents the Best of America

Justice Neil Gorsuch then jumped at the opportunity to bring up standing to bring a lawsuit in the first place. He said, “We have to tolerate one another” in this country, but this is the “only area [of the law where] we allow people to sue over offense” alone. “Why shouldn’t we apply normal standing rules that require more than offense?” Gorsuch asked.

Miller answered that the Peace Cross and other similar monuments send the message that “non-Christians are inferior” and “lesser citizen[s].” She continued, noting that the Peace Cross’ reference to valor, endurance, courage, and devotion “translates to Christian valor, Christian courage,” and so on.

Chief Justice John Roberts asked if one complaint from one person should be enough to bring a lawsuit. Miller replied, “No … it would have to be that you are a member of the community” and you are “personally affected by the message.”

4. How Should the Supreme Court Determine What an ‘Establishment’ of Religion Is?

Time and again, the conversation came back to which test the Supreme Court should use to evaluate monuments like the Peace Cross for an establishment clause violation.

The Constitution commands that “Congress shall make no law respecting an establishment of religion,” and this extends to the states through the 14th Amendment.

To determine whether a government action runs afoul of this prohibition, the Supreme Court has developed a number of tests that look for “excessive entanglement” of government with religion, an endorsement or disparagement of a particular faith tradition, or government coercion, while also weighing the history and context of the challenged religious practice or display.

The Supreme Court has applied these tests inconsistently, however, giving the lower courts little guidance about how and when to apply them. Last year, Justice Clarence Thomas wrote that the Supreme Court’s “establishment clause jurisprudence is in disarray.”

When the justices agreed to hear the Peace Cross case, many scholars hoped the Supreme Court would provide some clarity. But after 70 minutes of oral argument, a clear answer did not emerge.

Carvin, representing the American Legion, argued that the Supreme Court should adopt a test looking for coercion or proselytization. Justice Ruth Bader Ginsburg asked how that would be different from the protection offered by the free exercise clause. Carvin responded that being forced “to pay three pence to a minister wouldn’t violate free exercise … but it would violate the establishment clause.”

Kagan and Gorsuch both wanted to know what proselytizing is, and how it’s different from the current endorsement test. Carvin explained that proselytizing is the government preaching and trying to convert citizens, such as by conditioning access to government services on religious beliefs. Under this theory, a symbol like the Peace Cross would be “presumptively constitutional” unless the government was seeking to convert citizens to a particular religion.

Katyal argued that the Peace Cross is constitutional under any of the existing tests, and he pointed to its longevity (it stood for 86 years without any question of its constitutionality) and secular purpose as reasons the Supreme Court should uphold it.

Wall pointed to the particular significance of the cross in memorializing those who died in World War I. He maintained that the Supreme Court should consider the historical understanding of the establishment clause: to prohibit government coercion of religious belief or practice. The Founders did not seek to prohibit acknowledgement or accommodation of religion in the public sphere, so the justices should ask whether a monument like the Peace Cross poses the type of dangers the Founders were concerned about.

Miller maintained that the establishment clause “prohibits the government from preferring one religion over another,” and said there are roughly 20 different factors for the Supreme Court to consider. Roberts balked at that, saying, “There must be something more concise.”

5. Should the Supreme Court Overrule the Lemon Test?

Gorsuch brought up the unworkable multi-factor Lemon test (named for the Supreme Court’s decision in Lemon v. Kurtzman) that Justice Antonin Scalia once compared to a “ghoul in a late-night horror movie that repeatedly sits up in its grave and shuffles abroad after being repeatedly killed and buried.”

Gorsuch pointed out that the Supreme Court hasn’t used this test in years, although the lower courts continue to use it and sorely need guidance on this point. He asked Miller if the justices should officially retire this “dog’s breakfast” of a test. In response, she urged the Supreme Court not to overturn Lemon, arguing that it can be very useful.

Justice Brett Kavanaugh retorted, “How can it be useful when we haven’t used it in the most important cases that are on point here? … The lower courts need some clarity.”

When Katyal returned to the podium for his rebuttal, Kavanaugh posed the same question. Katyal replied that the Peace Cross is constitutional under any of the tests previously employed by the Supreme Court and that it’s “unnecessary to overrule Lemon” in this case. Instead, the justices should “wait for a case where Lemon” is relevant.

6. What’s the Real-World Impact of This Case?

If the Supreme Court rules that the Peace Cross is unconstitutional, it will put at risk dozens of other monuments throughout the country.

Alito asked Miller, “What message does it send knocking down crosses across the country?” She refused to answer, saying the Peace Cross could be moved to private land.

Sotomayor noted that the Peace Cross is “falling apart and has to be fixed,” so why not move it and then fix it up? Miller seemed unconcerned by the potential for damage to the cross, saying that entire historic homes have been successfully moved.

She also argued that the other parties grossly exaggerated the number of other crosses that could be affected by this case.

Alito rejoined, “Would you like us to write that … no other cross has to be torn down … in the opinion?” Miller replied that the case was “ill-suited for sweeping announcements.”

The American Legion put the issue in perspective in its brief to the Supreme Court:

If a century-old war memorial that is only in government hands because of traffic safety considerations arising 40 years after it was built is unconstitutional, it is difficult to conceive of any cross-shaped monument that will survive.

Based on how the oral argument went, it’s clear that a number of the justices are concerned about the broader impact a decision in this case could have. It could take months for them to sort through those questions, determine which test to use, and come to a consensus. But it seems likely that a majority of the justices will vote to uphold the Peace Cross.

The Supreme Court will likely issue its opinion by the end of June, when the current term ends.

It’s important to keep in mind that the Constitution does not mandate a “wall of separation between church and state,” as Thomas Jefferson once wrote in a private letter. Using the symbol of the cross to honor those who gave their lives defending our nation and our freedom is consistent with the Constitution, and the Supreme Court should uphold this longstanding tradition.