Why the Peace Cross Case Represents the Best of America 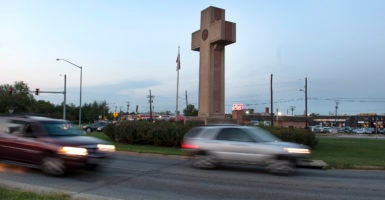 The Supreme Court will decide whether to allow a cross-shaped memorial to World War I soldiers to survive on property maintained by a government agency in Bladensburg, Maryland. (Photo: Mark Gail for The Washington Post/Getty Images)

One of the most profound differences between the American and French views of religious freedom is our treatment of religious symbols in the public square.

America’s Founders envisioned a public square that is neither secular nor sacred. In contrast, France has enacted policies that advance radical secularism.

French law has erased religious symbols from public view under a policy of secularism known as laïcité. In 2004, the French government banned students from wearing religious symbols such as yarmulkes, crosses, and hijabs (Muslim headscarves) in classrooms.

Last year, the French government relocated a statue of Pope John Paul II, which included a cross, from public to private land after a humanist organization sued.

The goal of laïcité was to foster social harmony between different groups in a multicultural, multifaith society. But in practice, the policy failed. Empowering the government to investigate and suppress religious expression has only exacerbated religious division.

Now the U.S. Supreme Court is faced with the same issue—whether to allow a cross-shaped memorial to World War I soldiers to survive on property that is maintained by an agency created by the state of Maryland.

In 1923, the American Legion worked with Gold Star Mothers to erect the Peace Cross memorial with private funds on private property in Bladensburg, Maryland. The memorial bears the American Legion’s symbol, a plaque with the names of 49 local soldiers who gave their lives, and the words “Valor, Endurance, Courage, Devotion.”

Over the years, as the town of Bladensburg developed, the Peace Cross ended up in the middle of a traffic circle in Veterans Memorial Park alongside other commemorative symbols.

Then, the American Humanist Association filed a lawsuit in 2014 on behalf of three plaintiffs who regularly drove by the Peace Cross and said they were psychologically offended by its presence. A lower court granted “standing” to the humanists, despite Supreme Court precedent that rejected the “offended observer” test.

During oral argument Feb. 27 at the Supreme Court, Justice Ruth Bader Ginsburg also highlighted the potential for the Peace Cross to “offend” those of other faiths. She pointed out that Americans are different now than we were during World War I, noting that at least 30 percent of Americans are now non-Christians.

The American Humanist Association’s lawyer described the Peace Cross as “too loud” and “too offensive,” stating that when Jews, Muslims, and humanists saw the war memorial, they “processed” it as a message that they are inferior and that their military service is not valued.

But when Chief Justice John Roberts reminded the lawyer that one of the fundraisers for the Peace Cross was Jewish, she dismissed his view as that of only one person.

Justices Stephen Breyer and Neil Gorsuch both reminded the courtroom of America’s legacy of religious pluralism.

“[A]ll our liberties come from freedom of religion,” Breyer said. “You have your religion. I have mine. We are not going to kill each other.”

Gorsuch noted that in America other people’s views must be tolerated, and people must learn to deal with offense. He warned that involving the government in censoring offensive speech would be to “dictate taste.”

Roberts pointed out the existence of diverse religious symbols on public property throughout the country, describing Native American totem poles with spiritual meaning on public lands.

In New York City, public schools display both the Jewish menorah and the Muslim crescent. And of public schools’ observance of Muslim religious holidays, Mayor Bill de Blasio said it was “a commonsense change and one that recognizes our growing Muslim community and honors its contributions to our city.”

Other cases invoking the Constitution’s establishment clause have involved Jewish eruvs on public utility poles. An eruv demarcates an area where an adherent of Judaism may walk on the Sabbath to get to synagogue and is allowed to carry certain objects.

The totem pole, the eruv, the crescent moon: Each of these symbols could cause offense to someone. According to the historic American understanding of freedom, however, the government doesn’t take anything away from anyone by allowing a symbol (secular or religious) merely to exist in the public square.

But when the government censors symbols just because they are religious, pluralism necessarily suffers.

And although the establishment clause prevents the government from elevating one religion above all others through coercion or exclusion, that’s not what the Peace Cross in Bladensburg does.

Our history, our pluralistic identity, and the future of both majority and minority faiths are at stake in this case. America’s unique path has enabled peaceful pluralism to flourish as our country has become more religiously diverse.

The Supreme Court should honor our constitutional tradition by allowing the public square to be full of symbols that reflect our diversity.