Courts Should Stay Out of the ‘Political Thicket’ of Gerrymandering 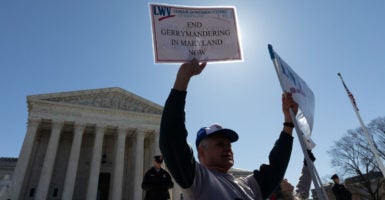 The Supreme Court heard oral argument this week in two cases challenging congressional district lines drawn for partisan advantage. The question before the justices is whether state legislators violate the Constitution when they draw up district lines with politics in mind.

Partisan politics has been part-and-parcel of the redistricting process since Gov. Elbridge Gerry gave his name to the concept of partisan map drawing in 1812 with a state Senate district in Massachusetts. Even the challengers in Tuesday’s two cases don’t claim that there should not be any politics involved in redistricting.

The challengers in this case are trying to convince the Supreme Court that there is some nebulous line marking the boundary of “too much politics”—a boundary that exists nowhere in the text of the Constitution.

They want to involve the courts even more deeply in what is, under the separation of powers principles, a basic legislative function. This reduces accountability and usurps legislative authority.

While voters can vote legislators out of office if they don’t like what the legislators have done—such as drawing gerrymandered districts—they can’t vote federal judges out of office. That’s why the Framers of the Constitution committed the task of drawing up district lines to state legislatures with the supervision of Congress—and not to federal courts.

Nevertheless, federal courts have been deeply involved in redistricting for decades now, despite the Supreme Court’s decision 15 years ago, in Vieth v. Jubelirer, holding that challenges to partisan gerrymandering are not justiciable.

In that decision, Justice Antonin Scalia reasoned that federal courts lacked the authority to hear disputes raising political questions that are better left to the political branches.

But Justice Anthony Kennedy left the door ajar to future challenges, suggesting in a concurring opinion that perhaps courts could hear these types of suits if “judicially discernible and manageable standards” could be found.

Just last term in Gill v. Whitford, a case arising out of Wisconsin, the Supreme Court once again was unpersuaded that any such standard exists and recognized that it may be impossible to take the politics out of drawing electoral district lines.

However, the court did not issue a final decision on the issue. Instead, it sent the case back to the lower court on procedural grounds because the plaintiffs had not established that they had standing to file suit.

As Justice Samuel Alito noted in Cooper v. Harris, another redistricting case in 2016, recognizing partisan gerrymandering claims as justiciable and a violation of the Constitution will “invite the losers in the redistricting process to seek to obtain in court what they could not achieve in the political arena” and transform the courts “into weapons of political warfare.”

The fact that the Supreme Court just heard its fourth partisan gerrymandering challenge in less than two years shows that Alito’s fear is not unfounded.

In Rucho v. Common Cause, one of the two cases heard on Tuesday, a district court struck down North Carolina’s congressional map drawn by the Republican-controlled legislature in 2016 as an unconstitutional political gerrymander because it favored Republican candidates.

The case was already pending when the Supreme Court decided Gill v. Whitford last term, so the district court had to reconsider its ruling in light of Gill, which had required showing a district-specific injury.

Back at the district court, the three-judge panel ruled for the challengers again, basing its decision on a laundry list of theories, including the creation of a “judicially manageable” three-prong test under the First Amendment and a claimed violation of the equal protection clause of the 14th Amendment.

The theory by the lower court that partisan gerrymandering violates the 14th Amendment is particularly dubious. As the Public Interest Legal Foundation pointed out in an amicus brief, the 14th Amendment was ratified in 1868. The authors, sponsors, and supporters of the amendment in Congress could not possibly have intended the amendment to prevent partisan gerrymandering.

Why? Because “they were elected from districts with far greater disparity between statewide political preferences and the partisan composition of legislative delegations than those districts challenged” in the North Carolina case.

When one compares the results of the 1864 presidential election with the congressional delegations of various states, for example, one sees numerous states where Republicans held all or almost all of the congressional seats even though the Democratic presidential candidate, George B. McClellan, received a large percentage of the vote.

Former Solicitor General Paul Clement, who represents the North Carolina legislature, told the court that plaintiffs were trying to claim that the Constitution guarantees proportional representation, which could not be further from the truth.

He also warned that if the court got “in the business of adjudicating these cases … they will come in large numbers, and they will come on your mandatory appellate jurisdiction.”

(While the Supreme Court largely has discretion to select which cases to hear, Congress has mandated that the court must hear appeals of certain types of cases, including those involving redistricting.)

“Once you get into the political thicket,” said Clement, “you will not get out and you will tarnish the image of this court for the other cases where it needs that reputation for independence so people can understand the fundamental difference between judging and all other politics.”

Clement also rebutted the notion that the Founding Fathers intended the Constitution to prevent partisan gerrymandering:

A lot of hard constitutional issues come before this court because you are dealing with something that was unknown to the framing generation. But the framing generation understood partisan gerrymandering firsthand. James Madison was the intended target of a partisan gerrymander by Patrick Henry. He complained about it bitterly. So did George Washington. Neither of them contemplated suit. Hamilton actually suggested to John Jay that the Federalists ought to partisanly gerrymander the Electoral College for the 1800 presidential election. John Jay say it wasn’t such a good idea.

All three authors of the Federalist Papers knew about this and didn’t think there was a judicial solution.

The second case before the court on Tuesday was Lamone v. Benisek, a challenge to Maryland’s congressional map drawn by the Democratic-controlled legislature in 2011. The challengers in that case argued the map was an unconstitutional political gerrymander because it violated the free speech and associational rights of Republican voters who were moved out of a traditionally Republican district.

A three-judge panel ruled in their favor, recognizing partisan redistricting as a violation of the First Amendment.

The problem in both of these cases is that the plaintiffs want courts to intervene in what are political disputes, violating the separation of powers principle that assigns redistricting decisions to state legislatures and Congress.

Further, there is no manageable standard—and not for a “lack of judicial imagination,” Clement told the Supreme Court. Politics is intrinsic to line drawing. The court is being asked to draw a line in the sand, i.e., some politics is acceptable but too much politics violates the Constitution. How could one possibly determine how much politics is too much?

How is a court supposed to determine how many congressional seats a political party is entitled to in a state when from election to election, from candidate to candidate, the number of votes for particular candidates of particular parties can vary greatly?

Indeed, after two hours of oral argument in the North Carolina and Maryland cases this week, the justices seemed no closer to a consensus than last year.

There is no holy grail of a manageable judicial standard, and the history of the Constitution and the First and 14th Amendments provide no support whatsoever for the claim that partisan redistricting violates the Constitution.

The Supreme Court should finally settle this matter and hold that political gerrymandering, while perhaps unwise and in some instances unfair, is not a constitutional concern and instead is a political thicket the federal courts should not enter.

If states think partisan gerrymandering is a problem, they can solve it by setting the parameters that govern the drawing of the boundaries of political districts.