Football Coach Was Sidelined for Praying. Now He’s Fighting Back. 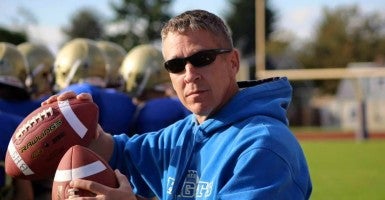 After being put on paid administrative leave for praying after games, a high school football coach is fighting back. (Photo: Larry Steagall/Kitsap Sun/Liberty Institute)

The high school football coach who was removed from his job for praying at the 50-yard line after games filed a federal complaint today with the Equal Employment Opportunity Commission, arguing the school discriminated against him based on his faith, The Daily Signal has learned.

The whole idea of having to hide my faith where nobody can see me doing it … that doesn’t seem very American to me.

After refusing to comply with orders to stop kneeling at the 50-yard line and praying after games, Kennedy was put on paid administrative leave and was at risk of losing his job. He was banned from participating in any Bremerton football programs, allowed only to sit in the stands when games were open to the public.

The school offered to accommodate the coach’s right to exercise his religion by providing him with private locations to pray, such as the press box. Kennedy said that wasn’t the tradition he started eight years ago, when he began coaching football.

“When I started praying, I said I was going to give God the glory on the 50-yard line, and right after every game,” Kennedy said, adding:

Nobody should have to hide who they are, especially in a public school setting, where I’ve walked through and seen “practice diversity and acceptance” all through the hallways. We’re not showing that. We’re not leading by example as adults. The school argued that praying is a religious activity and therefore violates the federal and state constitutional rights of students and others.

In a memo issued to the public by the Bremerton School District, they confirmed there is “indeed no evidence that students have been directly coerced to pray with Kennedy.”

In defense of their adverse actions against the football coach, the district cited a Supreme Court case where the judges ruled “that a school district’s practice of simply allowing its facilities to be used for religious expression during a district-sponsored football game violated the First Amendment’s Establishment Clause because of the reasonable perception by students and attendees of district endorsement of religion.”

Mike Berry, a senior legal counselor at Liberty Institute, the law firm representing Kennedy in his case against the school, said filing a complaint with the Equal Employment Opportunity Commission is a “necessary step for seeking vindication for Coach Kennedy’s rights.”

Berry said in the complaint that they’re requesting two things: for the school to reinstate Kennedy as a football coach and to allow him to privately engage in religious expression by praying at the 50-yard line after games, “as guaranteed by the Constitution and federal law.”

The Equal Employment Opportunity Commission can address the complaint in a number of ways, including launching an independent investigation and issuing their findings in a determination letter.

The Commission can also go so far as to sue the school district themselves.

This happened when the Equal Employment Opportunity Commission brought a lawsuit against Abercrombie & Fitch for refusing to hire a Muslim teenager who wore a hijab and had applied to work at the clothing store.

The case landed in the U.S. Supreme Court, where the justices ruled 8 to 1 that Abercrombie & Fitch had discriminated against the woman for failing to accommodate her religious practices.

The Equal Employment Opportunity Commission also brought a lawsuit against a trucking company for firing two Somalian-American Muslims truck drivers who did not want to transport alcohol because of their religious beliefs.

Berry, Kennedy’s lawyer, said he is “hopeful that the [agency] might do something similar here on behalf of Coach Kennedy as they obviously, very recently, have done on behalf of Muslim employees who also faced discrimination.” Joe Kennedy has been employed as a football coach by the Bremerton School District since 2008. After games, he usually kneels, offering a prayer that lasts for approximately 15-30 seconds. (Photo: Larry Steagall/Kitsap Sun/Liberty Institute)

Kennedy, who works full-time for the U.S. Department of Defense and is also a former Marine, calls being suspended from his job one of the “hardest things” he’s ever dealt with.

“My background is pretty diverse, being in the military, and one of the hardest things I’ve had to do is sit on the sidelines and actually watch my team play,” Kennedy said.

The first game he was sidelined for happened to be senior night.

“I have a kid that doesn’t have any parents, and he asked if I could stand with him like I do every year when they don’t have parents,” Kennedy said. “I wasn’t allowed to stand out there with one of my guys I’ve been coaching for years. I try to play a tough guy role, but that really tore me up inside.”

When the school placed Kennedy on paid administrative leave, the district issued a statement calling the action “necessary” for his refusal to comply with policies that ban “overt, public religious displays on the football field while on duty as a coach.”

“While the district appreciates Kennedy’s many positive contributions to the [Bremerton High School] football program, and therefore regrets the necessity of this action, Kennedy’s conduct poses a genuine risk that the district will be liable for violating the federal and state constitutional rights of students or others,” the school district stated.

“For this reason, Kennedy will not be allowed to further violate the district’s directives.”