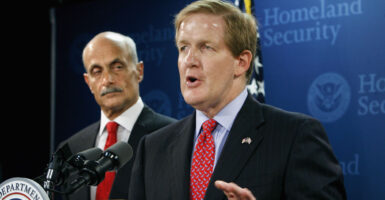 Last week, we lost a respected leader in the homeland security community and friend of The Heritage Foundation.

Edmund “Kip” Hawley, former administrator of the Transportation Security Administration under President George W. Bush, died at his home in Pacific Grove, California, on March 21. He was 68.

Hawley helped to establish the TSA—and later served as its head—and strengthened our nation’s security in the days following Sept. 11, 2001.

In the years that followed, he thoughtfully and wisely made changes within the agency, boosting the morale of TSA employees, and helped to thwart multiple terror attacks.

Prior to his work at TSA, Hawley worked in the White House as a special assistant to President Ronald Reagan and for the Department of Transportation. In addition to his time in the Reagan and Bush administrations, Hawley held countless roles and positions in the private sector devoted to improving security in aviation technology, among other areas.

Hawley was a leading voice for appreciating and capitalizing on the capabilities of knowledgeable security personnel. He was a leading advocate for adapting protocols as needed to guard against ever-changing threats.

In his book, “Permanent Emergency,” he emphasized the need to manage our nation’s security risks and to prevent tragic terror attacks in a sustainable manner. He frequently spoke on this topic, including at The Heritage Foundation, where he was always a welcome guest.

Hawley truly cared about America’s strength and public safety. He also cared deeply about those who worked for him, and was highly regarded by all as a selfless man and patriot. Ellen Murray Howe, a former spokeswoman for the TSA, described him as: “a very humble person … It was never about him, it was about the mission.”

He is survived by his wife Janet, two sons, three grandchildren, five siblings, and his mother.

Truly, we lost a great American and friend. Rest in peace, Kip Hawley.