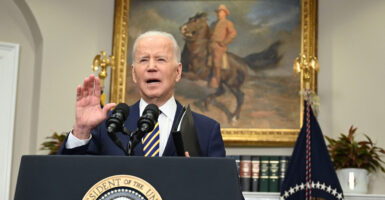 Perhaps with the intention of making himself look tougher, President Joe Biden stands before a portrait of one of his predecessors, Rough Rider President Teddy Roosevelt, as he announces a ban on U.S. imports of Russian oil and gas March 8 in the Roosevelt Room of the White House. (Photo: Jim Watson/AFP/ Getty Images)

I wrote last week about the collapse of the Soviet Union as result of the strength, moral clarity, and leadership of President Ronald Reagan.

I quoted Reagan’s observation that the ultimate battle we fight, around the world and at home, is one of good and evil. This battle never ends.

Evil always seeks to advance, constantly in search of the retreat of the presence of good, as it seeks opportunities for expansion.

There simply is no other way to understand the horrible realities we confront today. Russian President Vladimir Putin is an evil man. A murderer and a thief. He chose to advance his outrageous and murderous agenda because he understood that opposite him in the world stood weakness and moral relativism, not strength and moral clarity.

While Putin utilizes Russia’s prodigious production of oil and gas as a major weapon in his war of aggression, the Biden administration is fighting its own war against America’s oil and gas industry.

I wrote recently about President Joe Biden’s nomination of Sarah Bloom Raskin to be vice chair for supervision at the Federal Reserve Board of Governors. Raskin is a leading voice to shut down America’s oil and gas industry, which she called “a dying industry.”

Under President Donald Trump, America’s oil and gas industry was booming. However, Biden has reversed everything.

One of the first victims has been suspending oil and gas leasing in Alaska’s Arctic National Wildlife Refuge. Now, as Americans see prices at the gas pump skyrocketing, and as Biden and Democrats worry about the fallout of this in an election year, the Biden administration is turning hat-in-hand for supplies to socialist despot Nicolas Maduro in Venezuela, who ruined his own country and was sanctioned by Trump.

Biden also is turning to Gulf producers Saudi Arabia and the United Arab Emirates to increase production. Aside from the rocky relations we now have with Saudi Arabia as the result of misguided Biden diplomacy, the Saudis and Emiratis are concerned, as The Wall Street Journal points out, about alienating the Russians, who now are a force in the Middle East.

How is it that the Russians have become power brokers in the Middle East?

Israeli leader and former Soviet dissident Natan Sharansky writes in The Wall Street Journal that the Russians stepped in as a force in the Middle East to fill a strategic vacuum left when the Obama administration, of which our current president was a part, chose to ignore its threat to stand against Syrian dictator Bashar Assad’s use of chemical weapons against his own citizens.

Then the Obama administration followed up with its ill-conceived nuclear deal with Iran, which Trump pulled out of and now the Biden administration is working to renew.

Iran poses a threat to Gulf oil producers such as Saudi Arabia and the UAE and also to Israel, which it threatens to destroy.

Sharansky notes that after President Barack Obama’s retreat, the Russians set up a military base in Syria and now broker its air space. Israel is dependent on Russian goodwill to allow it to counter Iranian aggression in Syria, a direct threat to its security.

Among Wall Street climate change activists is Larry Fink, the CEO of BlackRock, the largest money manager in the world. Perhaps our president and these billionaire leftists can explain their logic to the Ukrainian citizens now being killed by Putin.