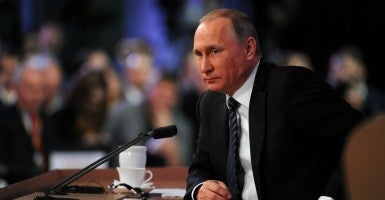 Russia is developing a drone submarine that can deliver a nuclear warhead or dirty bomb (targets electronics) at U.S. coastal areas. Russian officials confirmed the existence of the program – dubbed Kanyon by the Pentagon – after images of a document detailing plans for the sub were broadcast on Russian state-run television.

According to the document, Kanyon is intended to be capable of “damaging the important components of the adversary’s economy in a coastal area and inflicting unacceptable damage to a country’s territory by creating areas of wide radioactive contamination that would be unsuitable for military, economic, or other activity for long periods of time.”

“The Kanyon represents another example of Russia’s aggressive and innovative approach to the development of military capabilities against U.S. and Western interests. The possible yield of the warhead, in the megaton class, clearly is an attempt to inflict catastrophic damage against U.S. or European naval facilities or coastal cities.”

Furthermore, Russia is developing and deploying new warhead designs, including smaller nuclear special-effects weapons for which the United States has no equivalent capabilities. Russia’s new capabilities are expected to become operational before the decade is out.

In contrast, the U.S. nuclear modernization program is quite meager, essentially consisting of one new platform for each leg of the triad, as well as a new nuclear cruise missile. The new systems will not be delivered until the late 2020s (or early 2030s), long after Russia deploys its modernized weapons platforms. Furthermore, unlike Russia, the U.S. is not modernizing its warhead designs.

Russia’s aggressive modernization program makes it incumbent on the United States to reassess its nuclear posture. The 2010 Nuclear Posture Review, the document currently governing U.S. nuclear weapons policy, is premised on the assumption that “Russia and the United States are no longer adversaries, and prospects for military confrontation have declined dramatically.”

This is clearly no longer the case. Russia has challenged U.S. interests in Ukraine and Syria, and top Russian officials, including Putin, now almost routinely make nuclear threats against NATO.

To maintain the credibility of its nuclear deterrent, the U.S. should institute a much more wide-ranging and accelerated nuclear modernization program than what is currently on offer. The U.S. should also invest in its missile defense program in order to keep pace with the threat. Missile defense has suffered under the Obama administration, with several promising programs getting the axe. As such, the U.S. coasts are largely undefended.

The administration should reinvest in advanced missile defense programs and pursue construction of a missile interceptor site on the East Coast for the purposes of homeland defense.

Russia’s actions and words make clear it intends to reassert its strategic position and challenge the United States. The Kanyon program is a sobering example of the types of aggressive capabilities Russia is developing. The U.S. must revitalize its nuclear deterrent and missile defense program in response.