Biden’s Appeasement of Putin Was Years in Making 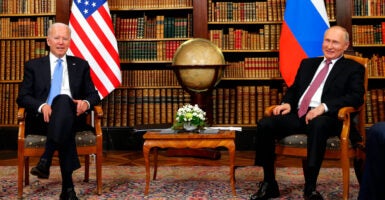 "[Russian President Vladimir] Putin knows that when I am president of the United States, his days of tyranny and trying to intimidate the United States and those in Eastern Europe are over," Joe Biden warned during the presidential campaign. As president, Biden has done little to uphold his promise of deterring Russian expansion. Pictured: Biden and Putin confer at the U.S.-Russia summit June 16 in Geneva. (Photo: Denis Balibouse/ Keystone/Getty Images)

“One small thing to be thankful for is that [Donald Trump] is not in the White House as the Ukraine crisis unfolds. He’d side with Russia,” tweeted Francis Fukuyama, author of “The End of History and the Last Man.”

The headline on Eugene Robinson’s Washington Post opinion column reads, “With Biden standing firm, Putin must wonder: Where’s Trump when I need him?”

You could find similar sentiment from foreign policy experts strewn across social media. Surely, even former President Donald Trump’s most passionate antagonists must be slightly curious as to why Russian President Vladimir Putin, the real villain of this tale, didn’t move on eastern Ukraine after successfully installing the orange man as an alleged infiltrator in the White House.

What better time could there have been for an invasion or annexation? Why now and not then? Then again, the notion that President Joe Biden has shown firmness or deftness on foreign policy is at odds with not only recent events—most notably the disastrous pullout from Afghanistan—but also 50 years of his history.

On the issue of Putin, Biden has been relentlessly wrong. In 2009, Biden went to Munich and delivered the Obama administration’s first major foreign policy speech, arguing that it was “time to press the reset button” after eight years of purported American antagonism toward Russia.

It was Biden who then spearheaded the effort to reward Moscow by giving Russia access to the World Trade Organization: He told nominal Russian President Dmitri Medvedev that Russia’s access to the WTO was “the most important item on our agenda.” At the time, a Reuters headline announced, “Biden backs Russia WTO bid, praises Medvedev.”

Biden loves to take credit for Obama-era foreign policies. Well, it was the Obama administration that also spent years trying to kill the Magnitsky Act, which listed corrupt Russian officials and barred them from American financial markets, before bipartisan pressure compelled them to flip-flop.

In his book “Red Notice,” Bill Browder, the driving force behind the act, wrote that “ever since Barack Obama had become president, the main policy of the U.S. government toward Russia had been one of appeasement.”

Even before Obama was caught on a hot mic telling Putin puppet Medvedev that he would have more “flexibility” on missile defense after the 2012 presidential election, he had already canceled long-promised missile defense systems to our allies in Poland and the Czech Republic.

And it wasn’t during a potential invasion.

Indeed, Democrats didn’t merely mock Republican presidential candidate Mitt Romney in 2012 as an out-of-touch amateur for maintaining that Russia was our top geopolitical threat. They sent a smug Biden to appear on the Sunday morning news shows, where he depicted the Putin kleptocracy as a burgeoning ally and partner.

Though “we have disagreements with Russia,” Biden noted, they were “working closely with us” on a slew of issues. “This is not 1956,” he scoffed, a few years before Putin’s special forces dropped into Crimea.

Obama also allowed Russia to operate with impunity in Syria, almost surely to protect the prospects of the Iran nuclear deal. Trump, unencumbered by the need to kowtow to the Iranians, killed a few hundred Russian mercenaries in Syria.

Perhaps a policy of deterrence and strength, rather than appeasement, works.

“Putin knows that when I am president of the United States, his days of tyranny and trying to intimidate the United States and those in Eastern Europe are over,” Biden warned during the presidential campaign. Outside of empty braggadocio, meant to contrast himself with Trump, Biden has done little to uphold his promise of deterring Russian expansion.

In his first year in office, the president who promised to stop “rolling over in the face of Russia’s aggressive actions” killed the Keystone pipeline, which would have left us less susceptible to the vagaries of the international energy market.

Biden also strengthened Putin’s hand by waiving Trump-era sanctions on a company building the Nord Stream 2 pipeline from Russia to Germany. Last year, Biden sent Secretary of State Antony Blinken to the Arctic Council for another shot at a “reset,” in which, as Bloomberg explained it, “Joe Biden and Vladimir Putin can reinvigorate U.S.-Russia relations that have been in a deep freeze for years.”

The United States isn’t going to go to war over Donetsk or Luhansk—or even uncontested areas (for lack of a better term) of Ukraine. And perhaps there is little that Biden can do at this point to reverse Putin’s advances.

It is also true that Trump’s rhetorical obsequiousness toward Putin was often cringe-worthy and despicable. Yet, the fact is that Trump’s foreign policy, in action, was more successful. Biden’s policy appeasement, on the other hand, has been a 15-year project.

It’s no surprise that Putin thinks this is the time to strike.