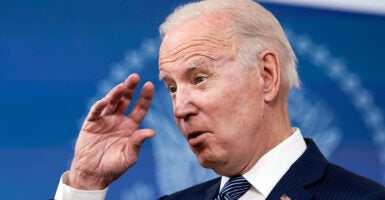 With inflation at a 40-year high, politicians understandably want to ease the pain.

The good news is that federal lawmakers can help by paring back deficit-financed spending and removing government-imposed barriers to work and economic activity.

The bad news is that many politicians instead are looking for easy artificial fixes, like temporarily suspending the federal gasoline tax or mandating higher minimum wages, which could make things worse.

Take President Joe Biden’s recent executive order requiring a $15 minimum wage for all federal employees and federal contractors. Though $15 an hour doesn’t seem like all that much, and since inflation hurts lower-income Americans the most (because they spend a higher portion of their income), it might seem like a good idea to mandate higher minimum wages.

The problem, however, is that higher wages that come from government command, instead of market demand, can end up hurting the people they aim to help and lead to unintended consequences.

One of those is higher inflation.

Misguided COVID-19 policies, which functioned as artificial wage increases, demonstrate how artificial wage hikes cause higher prices. The widely available and super-sized pandemic unemployment insurance benefits functioned like a massive minimum wage increase. With two-thirds of unemployed workers able to make more from unemployment than from working, employers had to raise wages to get the workers they needed.

Fast-food restaurants started offering $15 or more per hour, sometimes complete with $1,000 signing bonuses, paid family leave, or tuition assistance. Between March 2020 and March 2021, the reservation wage—the lowest wage at which workers say they are willing to accept a job—jumped 26%, from $40,197 to $50,825.

Higher wages are a great thing if they come as a result of workers becoming more productive. But if employers have to pay people more to do the exact same thing, they have to raise prices.

A whopping 48% of employers reported that they increased compensation in December, and 32% said they planned to raise compensation over the next three months.

While workers’ median hourly wages are up 5.7% over the past year, 7.5% inflation has more than erased those gains.

Minimum wage increases will add to this inflationary cycle. And that’s just the start of minimum wage laws’ unintended consequences.

The president is correct that wages are linked to productivity—but he’s got the relationship reversed: Higher productivity boosts wages. And education, experience, and investments in technology—not government laws—are the keys to productivity gains.

But the alternative of increasing wages in hopes of higher productivity is like voluntarily paying higher tuition in hopes of earning a higher salary upon graduation. It’s not the tuition price, but students’ performance, that affects what they produce and earn.

Federal employees already receive significant compensation premiums and lack accountability, as only 21% of federal workers say that pay raises depend on how well people do their jobs, and only a third believe that promotions are based on merit.

That suggests that federal lawmakers could boost productivity and pay by shifting to performance-based pay, which economic studies have shown lead to wage increases of 6% to 10%.

Minimum wage jobs aren’t career aspirations, and they certainly aren’t enough to support a family. Fortunately, few workers remain in minimum wage jobs for long, and only 0.07% of workers in the United States are single parents living in poverty while earning the minimum wage.

But minimum wage jobs have been important steppingstones for many Americans (myself included) to gain the experience necessary to move up the income ladder. Cutting off the bottom rungs of the ladder through minimum wage laws would be especially harmful for individuals with disabilities, limited English language abilities, criminal histories, or limited education.

There are better ways to help workers achieve higher incomes, such as by expanding alternative forms of education, reducing unnecessary regulations so that businesses can invest more in workers, and opening doors to entrepreneurial opportunities for lower-income workers by reforming occupational licensing laws and allowing all types of workers the freedom to contract.

They certainly beat boosting the minimum wage, which does more harm than good.

This article originally appeared in the Miami Herald.