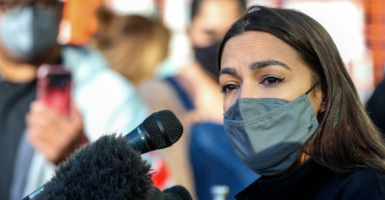 “It is utterly embarrassing that ‘pay people enough to live’ is a stance that’s even up for debate,” Rep. Alexandria Ocasio-Cortez recently tweeted. “Override the parliamentarian and raise the wage. [McDonald’s] workers in Denmark are paid $22/hr + 6 wks paid vacation. $15/hr is a deep compromise—a big one, considering the phase in.”

The most obvious problem with the New York Democrat’s contention is that Denmark, like other Scandinavian nations, doesn’t have a statutory minimum wage.

Industries and workers engage in sector-by-sector salary negotiations, which might well undermine intra-industry competition, but which is a much better idea than the flat national-wage floor being peddled by Democrats.

So, this popular progressive talking point about Denmark’s miracle middle-class fast-food worker doesn’t make much sense to begin with.

Especially when one considers that the per-capita income in the United States is virtually the same as in Denmark—quite a feat given that we’re a pluralistic nation of around 330 million people that naturalizes another 900,000 people every year, many from poor nations, and that Denmark is a homogeneous country of fewer than 6 million citizens that, in recent years, has effectively shut down its borders to poor immigrants.

Denmark’s generous welfare state is propped up by shared social and cultural norms, and institutions that are habitually reviled by American progressives: unimpeded international trade, low regulatory burdens on business, and sometimes oil and gas checks—Denmark and Norway are Western Europe’s largest oil and gas producers.

Then there is the matter of what exactly $45,000—the salary an employee making $22 an hour on a full-time basis would earn—means in each country. Denmark can afford its system because high taxes are paid by all its citizens, not just the wealthy.

Not only do Danish fast-food employees making $45,000 hand over around half their earnings to the government, they pay a 25% value-added tax on most purchases, as well as a number of other levies. In return, Danes are afforded all kinds of government-provided services.

Presumably, Ocasio-Cortez approves of this arrangement. Either way, Americans whose eyes light up at the prospect of making $22 per hour should know that nearly $11 of that goes straight to the state.

Further, how much does a hamburger cost in Denmark? Spoiler: considerably more.

If the federal government forced fast-food chains to start paying employees $22 per hour, and giving them six weeks paid vacation, and health care, and all the other goodies that progressives want to compel companies to offer, American consumers should be prepared to pay more for food or to be served by robots.

The last time there was a push for a $15 minimum wage, in 2015-2016, McDonald’s quickly rolled out a touchscreen self-service kiosk makeover. Since then, that technology has only gotten better—and cheaper. Big chains like to offer up rhetoric that pleases the activist left, but in the end, they are not charities but businesses with stakeholders. And profits matter.

Now, I understand that socialists would be happy creating a permanent proletariat that is reliant on government to fix their wages and dictate all benefits. And, certainly, there is nothing demeaning about taking a job at a fast-food restaurant.

For many young people, it’s a temporary stop where they can take on responsibility for the first time and earn some money. For others, who need these jobs, it offers flexible hours and part-time work.

Most people do not make careers out of working at Wendy’s. Fast-food chains have massive employee turnover rates. Some experience a 100% turnover every year.

The other day, Ocasio-Cortez argued that, “when we keep the minimum wage artificially low, it’s at a huge cost to our government, … they’re essentially enormous subsidies to Walmart.”

The notion that Ocasio-Cortez is apprehensive about government subsidies is, of course, risible. But she’s also wrong.

Walmart, which revolutionized shopping by offering millions of low-income Americans affordable goods (progressives never mention that part of the equation), recently increased its internal minimum wage to $13-$19 per hour for most workers, while Amazon, Target, and Costco have raised their minimum wages to $15 per hour.

Is this a good idea? We’ll see.

As Thomas Sowell once pithily noted, all public policy is about trade-offs. The increases will help some workers, no doubt. But they will also cost jobs, either by leading to less overall hiring or by forcing consumers to pay “artificially” high prices, rather than spending the difference elsewhere.

The only nonartificial minimum wage is zero—which, incidentally, is what the 1.4 million people the Congressional Budget Office says would lose work due to a $15 national minimum wage will be making if Ocasio-Cortez’s side of the argument wins.