A Racist Virginia School Board and Principal Get Called Out 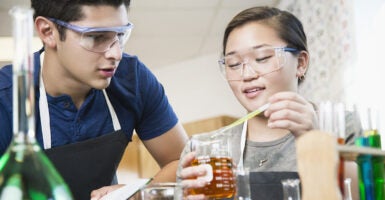 A judge threw out the racist admissions policy of Virginia’s Thomas Jefferson High School, which tried to “rebalance” the student population in favor of blacks and Hispanics by discriminating against Asian Americans. (Photo: Getty Images)

In a terrific win for parents, hardworking students, and those who want to end discrimination in our schools, a federal judge has thrown out the racist admissions policy of Thomas Jefferson High School for Science and Technology, a prestigious public magnet school in Fairfax County, Virginia.

On Feb. 25, federal district court Judge Claude Hilton granted summary judgment to the Coalition For TJ, a coalition made up of Asian American parents with children who had applied for admission to Thomas Jefferson High School or were planning to do so. They were represented by the Pacific Legal Foundation.

The parents challenged the change in the school’s admissions policy implemented by the elected members of the Fairfax County School Board in 2020. Hilton concluded that change was made with a clear racist purpose:

Board members and high-level FCSB (Fairfax County School Board) actors did not disguise their desire for TJ (Thomas Jefferson High School) to represent the racial demographics of Fairfax County or Northern Virginia as a whole.

Despite their efforts at ensuring “holistic” admissions, Hilton found the policy to be “racial balancing for its own sake,” and therefore, “patently unconstitutional.”

As internal emails and other evidence showed, the 12 members of the school board were upset that so many Asian American students, and so few black and Hispanic students, were accepted at the school. So was Thomas Jefferson’s principal, Ann Bonitatibus, who seemed more concerned with the race of her students than their individual character or education.

With the implementation of the new admissions policy, which resulted in 64 more students being admitted than in previous classes, the percentage of Asian American students in the class of 2025 still fell to only 54%.

The change in the admissions policy was prompted, in part, by George Floyd’s death in May 2020. Bonitatibus sent an email a week after Floyd’s death to the Thomas Jefferson community about “black citizens facing death and continued injustices” and complaining that the high school “did not reflect the racial composition” in the Fairfax County school system.

Other board members expressed similar sentiments, with one saying she was “angry and disappointed” about the old admissions policy and saying they had to “address the under-representation of black and Hispanic students.” While white students are also “underrepresented” at the school, that apparently wasn’t a concern to the board members.

But Hilton found that “board member communications show a consensus that, in their view, the racial makeup of TJ was problematic” and they “set out to increase and decrease the representation of certain racial groups at TJ.”

The school’s original, rigorous admissions policy explains why it has been regularly rated as one of the top high schools in the country. Students from five different school districts are eligible to apply. But in addition to requiring applicants to have a minimum core 3.0 grade point average, the school also required students to take three standardized tests: the Quant-Q, the ACT Aspire Reading, and the ACT Aspire Science tests.

Students who met certain minimum scores advanced as semifinalists for another review that evaluated their GPA, test scores, teacher recommendations, responses to three writing prompts, and a problem-solving essay.

The daughter of one of the authors went through this tough process and graduated from Thomas Jefferson in 2012.

Keep in mind that in the case against the school board, there was no evidence produced of any kind that the preexisting admissions policy, including the battery of tests that was administered to applicants, was at all discriminatory. It is simply that this objective process did not produce the racial proportions the school board and the school principal wanted.

Instead, the board eliminated the standardized tests in their entirety, got rid of the multistage review process, and implemented a “holistic” (i.e., subjective) evaluation that included “Experience Factors” such as “(a) attendance at a middle school deemed historically underrepresented at TJ; (b) eligibility for free and reduced price meals; (c) status as an English language learner; and (d) status as a special education student.”

The school board also guaranteed seats for 1.5% of the eighth-grade students at each public middle school, creating a pool for the remaining unallocated seats.

Hilton concluded that there was “no dispute” that the board was “racially motivated” and “acted with discriminatory intent” when it changed the admissions policy. It implemented, according to Hilton, a policy that “does not treat all applicants to TJ equally,” where Asian American students are “disproportionately deprived of a level playing field.”

Moreover, the board short-circuited the usual process for making policy changes in order to dampen public opposition, going out of its way to prevent input from stakeholders—something Hilton himself noted. He found that “the process was rushed, not transparent, and more concerned with simply doing something to alter the racial balance at TJ than with public engagement.”

The process suggests—as one board member said in an email—that the board was moving “quickly” because it was “currently incurring reputational/political risks,” meaning that “now is better timing.”

Hilton contrasted the fact that the school board held “full, public meetings” on renaming two schools named after Confederate generals with the fact that the “public did not even see the proposed plan that the Board actually adopted for TJ admissions until 30 minutes before the final meeting.”

He said that the board could not “transform racial balancing”—discriminatory conduct forbidden by the Constitution—by “simply relabeling it ‘racial diversity.’” And it didn’t even consider alternatives “like further increasing the size of TJ or providing free test prep … before the Board defaulted to a system that treats applicants unequally in hopes of engineering a particular racial outcome.”

What is crystal clear from this decision and the evidence that was introduced is that the members of the Fairfax County School Board, the principal of Thomas Jefferson High School, and numerous others inside the school system had no hesitation in implementing a racially motivated, discriminatory admissions policy intended to achieve a racial quota system that would allocate seats in the entering class based not on the qualifications, credentials, and hard work of those students, but their skin color.

All of them should be ashamed for betraying the public trust and engaging in such egregious conduct.