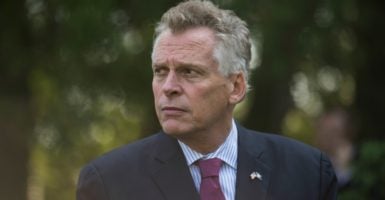 This motion for contempt follows Gov. Terry McAuliffe’s August press conference in which he announced that he had again restored the voting rights of 13,000 felons who had registered to vote. (Photo: Douglas Graham/ Loudoun Now/Newscom)

Virginia state legislators have filed a motion with the Virginia Supreme Court asking for an order requiring Gov. Terry McAuliffe to “show cause” why he should not be held in contempt for violating the court’s July 22 order that vacated McAuliffe’s executive orders restoring the voting rights of 206,000 felons.

The court ruled that the governor’s clemency and pardon power could only be exercised on an individual, case-by-case basis and that the voter registrations of felons who had registered as a result of McAuliffe’s orders had to be canceled.

This motion for contempt follows McAuliffe’s Aug. 22 press conference in which he announced that he had again restored the voting rights of 13,000 felons who had registered to vote after he issued three blanket restoration orders earlier in the summer. His press announcement said that “individual restoration orders were printed with the Governor’s signature.”

How much of an individualized review could be given by McAuliffe to these 13,000 felons in the four weeks between the Supreme Court’s July 22 decision and his press conference on Aug. 22 was certainly in question.  And that is what the contempt motion focuses on—the lack of any real individualized review of these felons’ cases.  In fact, the motion cites a spokesman for the governor who said that the only review of the record would be to confirm completion of the felon’s sentence and any supervised release.

As the legislators say, the governor is certainly entitled to disagree with the state’s constitution or the court’s interpretation of it, but he cannot set himself above the law.

The motion points out that McAuliffe “denounced” the Virginia Supreme Court’s order, “vowing to accomplish precisely the same result simply by issuing individual restoration orders for precisely the same class of approximately 206,000 felons, again without any regard for their individual circumstances and without any specific request by individuals seeking such relief.”  Thus, McAuliffe “reads this Court’s decision as permitting him to suspend the Constitution’s general rule disenfranchising felons so long as he does so with 206,000 restoration orders rather than three. He is wrong.”

According to the motion, the court did not reduce the relevant provisions of the Virginia Constitution “to a printing requirement.” The protections of Virginia’s Constitution “do not depend upon how many reams of paper and autopen machines the Governor deploys to work his will.” As the legislators say, there “is no substantive difference between the Governor’s current actions and his three executive orders … that the court invalidated.” This is an open declaration by McAuliffe of “his resolve to evade the Court’s order.”

The motion uses McAuliffe’s own words against him, citing McAuliffe’s proclamation that “the Virginia Supreme Court has placed Virginia as an outlier in the struggle for civil and human rights” and that he “cannot accept” the court’s ruling.  That kind of contemptuous, unfair criticism of the court is certainly not the smartest thing that a party to a lawsuit can do.

It also demonstrates a level of disrespect and lack of understanding of Virginia’s constitutional provisions and governmental structure that is inappropriate and unseemly in the executive officer of the state.

McAuliffe added to that, as the legislators point out, when he showed his “disdain” for the court and claimed that the court acted not in accordance with the Constitution but because of “the way things have always been done in the Old Dominion.”

He even suggested, according to the motion, “that the Court’s ruling was comparable to requiring children to attend segregated schools, assigning seats on buses on the basis of race, prohibiting interracial marriage, and imposing a poll tax.” McAuliffe expressed his determination to act notwithstanding the court’s order because he would “not stand down and allow discriminatory state laws to destroy the lives and families and destabilize our communities.”

As the legislators say, the governor is certainly entitled to disagree with the state’s constitution or the court’s interpretation of it, but he cannot set himself above the law. They cite an old Virginia case in which the state Supreme Court said that a government official cannot “go his own way because he deems the law’s requirements to be unwise or its restraint vexatious. In such manner does a government of laws become a government of men.”

What’s Next for McAuliffe

The motion asks for an order from the Virginia Supreme Court that would require the governor to show cause why he “should not be held in contempt.” In the alternative, the court should enter an order enforcing its prior judgment and prohibiting the registration of the felons “whose rights were purportedly restored by the orders issued, without application from the felon.” At a “bare minimum,” the court should authorize the legislators to “conduct discovery to determine in detail the purpose, scope, and effect” of McAuliffe’s conduct in response to the court’s July 22 order.

I’ve been a lawyer for a long time and I can’t ever remember seeing a motion filed to hold a governor in contempt. It is going to be very interesting to see whether McAuliffe finally tempers his public statements as a result of this motion or whether he continues to criticize and defy the state’s highest court.

One thing’s for sure—I would not want to be the state assistant attorney general who has to show up before the Virginia Supreme Court to explain the inflammatory and offensive statements made by the governor about the court and to defend his defiance of the court’s prior order.