In the Name of ‘Diversity,’ Woke Bureaucrats Lower the Number of Asians in the Nation’s Best Public School 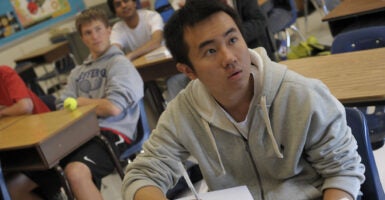 Thomas Jefferson High School for Science and Technology in Arlington, Virginia, is widely considered the best high school for math and science in the region. It is the No. 1 ranked high school by the U.S. News and World Report in the entire nation.

“That place is so difficult and so rigorous, that you’re just beaten,” says Asra Nomani, the mother of a Thomas Jefferson student and the leader of the Coalition for TJ, an education advocacy group for the high school. “You don’t even know if you’re going to make it, like as a family, because your child is slogging so much.”

It’s not a school made for just anyone. But the Fairfax County School Board believes that the school needs to diversify at all costs, even at the cost of excellence.

On Monday, the school board decided that it was going to drastically change the admissions process to Thomas Jefferson to force more black and Hispanic students in the school, which is 70% Asian American.

Fairfax officials are proposing two systems: either “holistic evaluation” that gives preferences for being black or Hispanic, or a lottery for admission for anyone with a 3.5 grade point average.

The previous system, which was reliant on grades and test scores, relies on methods that supporters say perpetuate “privilege,” such as standardized exams that can be test-prepped.

These are vast exaggerations that only serve to undermine the nation’s best public school, the home of future scientists and engineers that will invent the next great discoveries.

The issue of opportunity in Fairfax County is not that the admissions process for a single public school is racist against black and Hispanic students.

The issue is that the number of black students who made it to the semifinalist round of the application process in the first place was so low.

The semifinalist round is the minimum standard for admissions—it signals you have the requisite academic qualifications to enroll at Thomas Jefferson. In 2005, 507 white students made it to this semifinalist round, compared to just 11 black students.

The problems of too few black and Hispanic students in the semifinalist rounds of admissions cannot be fixed with racial quotas. Not only are quotas in violation of our ideals and laws, but they also paper over the underlying causes of the achievement gap in education—such as the lack of school choice, or high out-of-wedlock rates that leave many children without a father in their lives.

Rather, solving these problems requires addressing them at every level of education.

But the liberal chattering class doesn’t want to hear this logic. They would rather dispense with the idea of meritocracy in general.

The Fairfax County School Board’s own analysis for its merit lottery program predicted an upsurge in admitted candidates for blacks, Latinos, and whites. The Asian population, on the other hand, would drop by a projected 27%.

A coalition of parents analyzed the data and found a steeper drop admittance rate for Asians: 55%. In contrast, the white population would shoot up to 45% of the total student body. And the black and Hispanic representation would both remain in the single digits.

The messaging of woke students, and the woke school boards propping their ideas, is loud and clear: Asians suffer, but that’s OK, in the name of “diversity and inclusion.”

Mind you, it did not matter that these Asian students put in hundreds of hours of work in their school lives and sacrificed social life to give themselves the best shot to enter a school known for its brutal work hours.

Or does anyone question the most fundamental fact of it all—the fact that a “merit lottery” would inevitably result in a drastic decline in overall school performance?

The simple mathematical facts beget this utterly logical conclusion: If before you selected the most meritorious in rank order, and now have reverted to selecting from a lottery of students above a lower cutoff point, you sacrifice one immediate, clear principle.

Sacrificing that principle will have a powerfully distortive effect on the overall excellence and reputation of your school, your community, and your world.

That principle is meritocracy.

Rather than lean on “merit lotteries” and “holistic evaluations” in an attempt to ensure that specific groups are proportionately represented in highly ranked schools, we should be working toward a country in which every individual—from any and every group—can realize their full potential, and can go as far as their own merit takes them.