We’re Mortgaging Our Kids’ Futures. Here’s a Plan to Change That and Lower Taxes. 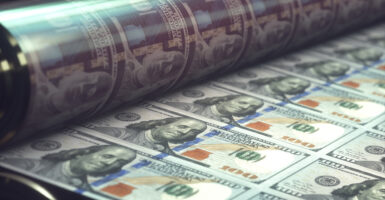 America is a great nation. But it won’t stay that way forever if its leaders continue acting like the solution to all our ills is more federal spending and regulations. The federal government’s already outsized role in society creates far more problems than it solves.

America needs less taxes and fewer regulations, and to that end, Washington must stop spending like it’s playing with Monopoly money.

That’s $12 trillion of future tax increases that can be prevented if Congress and the White House will heed the blueprint. Projected further into the future, the Budget Blueprint’s tax savings would be even more dramatic.

The Congressional Budget Office estimates that on the current trajectory, federal public debt will rise to over 200% of our gross domestic product—the total value of all goods and services produced annually within our borders—by 2051.

That means the next generation would have to pay 7 cents out of every dollar of the American economy just on interest payments to the debt. That’s roughly double what the federal government currently spends on national defense.

Mortgaging our children’s future like that would be moral negligence.

The blueprint rethinks the role of the federal government in American life today. It trims, reforms, and, in many cases, eliminates federal programs that do more harm than good for the American people. The Budget Blueprint shows it’s not too late to balance the budget and still have room left over to reduce taxes on individuals and businesses by more than $2 trillion over 10 years.

The plan includes more than 200 concrete proposals to restore the federal government to its proper, limited role and unshackle the American economy from burdensome federal taxes and regulations.

Excessive taxes punish hard work and stifle investment and entrepreneurship, all of which America needs to grow, create good jobs, and compete internationally.

The Budget Blueprint would prevent tax increases that—under current law—loom for Americans in every tax bracket. After 2025, the individual tax cuts of the 2017 Tax Cuts and Jobs Act are set to expire. The blueprint would block these tax increases from being implemented.

Altogether, because of the 2017 tax cuts, taxpayers in the bottom 75% paid 10% less in federal taxes in 2018 than in 2017. The Budget Blueprint preserves these tax savings.

The Budget Blueprint would also make the individual and corporate tax codes fairer and flatter. It removes more than $1 trillion of narrow and economically harmful tax preferences, replacing them with pro-growth tax reforms like reducing business tax rates, repealing the death tax, and making the expensing of capital assets permanent.

Unless extended or made permanent, full expensing of short-lived capital assets will phase out beginning in 2023. If the provision phases out, when a business purchases new assets, such as machinery and equipment, it wouldn’t be able to immediately deduct the full amount of those costs as it does with many other business expenses. Instead, the business may have to wait up to 20 years to deduct the assets’ full costs.

This essentially forces businesses to pay taxes on profits they haven’t yet earned. It discourages businesses from investing in capital, which then reduces their ability to expand, reduces employment, and reduces workers’ wages.

The Budget Blueprint would eliminate this anti-growth, anti-worker penalty on business investment once and for all. By making capital expensing permanent, the blueprint doubles down on the success of the 2017 tax reform that helped spur a $1,400 increase in non-management wages in the two years following the reform compared to the slow-growth trend that characterized the rest of the decade.

Additionally, the Budget Blueprint calls for the repeal of narrow tax credits like the tax credit for orphan drug research, the railroad maintenance tax credit, and a dozen subsidies for energy companies and various energy initiatives that force taxpayers to fund dubious programs that the federal government has no business subsidizing.

The plan would also repeal the state and local tax deduction, a federal subsidy to high-tax states that benefits the wealthy and encourages government mismanagement of state and local tax dollars. It would eliminate place-based economic development tax credits, getting the federal government out of the business of unfairly picking winners and losers in the economy.

The blueprint would also eliminate the lobbyist-friendly research and development tax credit, replacing complex rules and formulas that favor large corporations with straightforward expensing rules that apply equally to all businesses, regardless of their political connections.

Heritage’s Budget Blueprint lays out the path to a more prosperous society where hard work is rewarded, government dependency is minimized, our children are saved from a crushing debt they didn’t create, and where America leads the free world for generations to come.