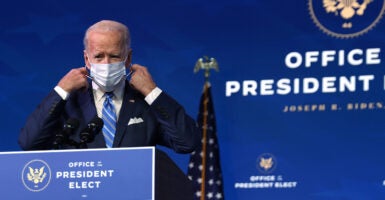 President-elect Joe Biden takes off his mask as he arrives at the Queen theater to present his plan for combating the coronavirus and jump-starting the nation’s economy, Jan. 14, in Wilmington, Delaware. (Photo: Alex Wong/Getty Images)

Millions of Americans are still unemployed in the wake of COVID-19 shutdowns. Unfortunately, President Joe Biden’s so-called American Rescue Plan fails to provide targeted relief to those directly impacted by the pandemic.

Instead, it borrows nearly $2 trillion more from future generations in order to dispense $1,400 checks to tens of millions of Americans already gainfully employed. It also funnels $440 billion to state and local governments, and bolsters federal unemployment benefits.

In addition, it imposes a jobs-killing minimum wage hike. This is atop $4.5 trillion of COVID-19-related stimulus and relief measures, including a $900 billion package enacted at the end of December.

These proposals constitute a long-term drag on economic growth. More stimulus checks will not further this economic recovery and flow mainly to those gainfully employed.

Importantly, this is not a typical economic recession. For the first time in our nation’s history, governments intentionally suppressed output and demand in an attempt to contain the virus.

As such, we shouldn’t try to treat this recession with fiscal policy used to address a far different, “normal” type of recession. Last year’s stimulus checks did little to “stimulate” the economy, and instead were largely saved by consumers, not spent.

The economic recovery thus far is fueled by the continued reopening. As COVID-19 becomes more contained, further recovery will ensue.

Nationally, economic growth in last year’s third quarter smashed all prior records—growing by 7.4%, according to the U.S. Bureau of Economic Analysis, a stunning 33.1% annual pace. Record growth occurred even as government transfer payments and Paycheck Protection Program expenditures dropped by 20% in the quarter.

The historic economic rebound this summer proves that those properly informed of the actual risks of the virus and the appropriate mitigation measures are enthusiastically participating in this reopening.

The Federal Reserve State Coincident Index—an estimate of economic conditions—vividly illustrates how wide the economic recovery is based on states. This index suggests economic output has actually increased relative to pre-pandemic in numerous states such as Utah, Missouri, Idaho, and Georgia—notably states without crushing, long-lasting shutdowns.

Meanwhile, states like New York, Hawaii, and Illinois remain mired in severe recessions. Only this month did New York Gov. Andrew Cuomo, a Democrat, and Chicago Mayor Lori Lightfoot, a Democrat, admit that their shutdowns of the service sectors may need to be relaxed.

It’s no surprise that unemployment in parts of California and New Jersey exceeds 15% while in numerous reopened communities it’s back under 3%.

This is an addition to the surge of cash thanks to more than $360 billion of federal government COVID-19 relief to state and local governments already provided in 2020—more than $4,000 for a typical household.

His plan would also price millions of those with less experience, education, or skills out of the labor force by doubling the federal minimum wage to $15. This would further squeeze the millions of small businesses struggling to just break even.

As Heritage Foundation scholar Rachel Greszler explains, “Politicians … are effectively telling people that, if you can’t produce at least $35,000 per year (the payroll cost of employing one full-time worker), you have no place in the U.S. labor market.”

Seattle residents learned the hard way that a well-intentioned minimum wage hike can chop the bottom rung off the economic ladder, denying those with fewer skills or less experience a chance to gain valuable on-the-job skills.

This colossal spending package underscores the importance of maintaining the filibuster, a Senate rule that requires a three-fifths super-majority to end debate on legislation. With the Senate split 50-50 between Democrats and Republicans, Vice President Kamala Harris will play a pivotal role as a tie-breaking vote.

The filibuster is the last line of defense against a socialist agenda that will bankrupt the country: massive tax hikes, government-run health care, and the Green New Deal—for starters.

Biden calls this massive spending proposal a “down payment” for an investment in economic growth. In reality, this is akin to a family tapping out their home equity line for an extravagant vacation to Cabo San Lucas. The two weeks abroad may be enjoyable, but their long-term financial future severely affected.

If Congress wants to help Americans hit the hardest, it needs to narrowly tailor relief measures to the health crisis and provide necessary legal protections to ramp up the ongoing economic recovery, not counterproductive stimulus measures.