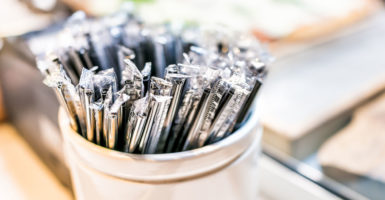 A Michigan bill would charge restaurant owners with a misdemeanor for giving plastic straws to customers unless the customer explicitly requests one. (Photo: krblokhin/Getty Images)

A Michigan state lawmaker is pushing two bills that would impose a hefty fine on distributing plastic straws unless requested and ban single-use plastic items such as cotton swabs, cutlery, and plates, the Michigan Capitol Confidential reports.

Democratic state Rep. Tom Cochran introduced the pair of bills, House Bill 6504 and House Bill 6505, Nov. 27 to start a conversation about single-use plastics and “the impact they have on our environment.”

“I guarantee my bills are not going to get a hearing or any movement,” Cochran told the Capitol Confidential. “I felt very strongly that I wanted to make a statement and hopefully move the conversation forward and I’m working with my colleagues to hopefully get the issue taken up in the future.”

Bill 6504 would ban the sale of all single-use plastics by 2024, except in cases where no “sustainable alternative” exists. Bill 6505 would charge restaurant owners with a misdemeanor for giving plastic straws to customers unless the customer explicitly requests one.

The misdemeanor’s penalty is unclear. One section says those guilty of violating 6505 are “punishable by a fine of $500.00 for each day” the law is violated. Another section says a restaurant owner will be warned for the first two violations and fined $25 per violation after that, but no more than $300 annually.

Cochran did not respond to requests for comment and clarification.

The bills are similar to recent laws passed in California and Washington.

On Sept. 20, Democratic California Gov. Jerry Brown signed legislation banning full-service restaurants from handing out plastic straws unless requested by a customer. Restaurants in violation can be fined up to $300 a year. Individual cities in the state have enacted much stiffer penalties, such as Santa Barbara’s that hits straw ban violators with six months in jail or $1,000 in fines.

Several restaurant chains, such as McDonald’s and Starbucks, have begun transitioning from plastic to paper straws on their own.