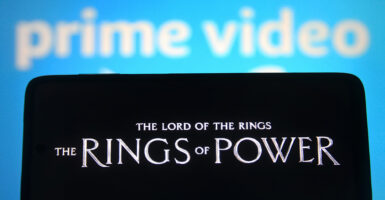 Amazon's "The Lord of the Rings: Rings of Power" represents yet another beloved cultural artifact the left wants to ruin. (Photo Illustration: Pavlo Gonchar/SOPA Images/LightRocket via Getty Images)

The biggest threat facing Middle-earth is no longer Sauron or Morgoth, but Jeff Bezos.

Amazon released a trailer for its new “The Lord of the Rings: The Rings of Power” series during the Super Bowl, and the product advertised doesn’t inspire confidence.

The series is set long before Frodo and the Fellowship of the Ring marched across Middle-earth and focuses on an entirely new cast of characters we’ve never seen before on screen. Some of these characters were invented by J.R.R. Tolkien and come from the reaches of his extensive writing. Concerningly, others are invented out of whole cloth, made specifically for this show.

It is with these completely invented characters that some of the biggest issues arise. Take, for example, Princess Disa, played by actress Sophia Nomvete.

In the series, Nomvete is a beardless black woman. In other contexts, that could be a perfectly fine casting choice. But this is “The Lord of the Rings,” where Tolkien’s lore is quite clear. This is not what a dwarf looks like.

The creators of “Rings of Power” have made it clear why they made this choice. In an interview with Vanity Fair, the show’s executive producer, Lindsey Weber, said, “It felt only natural to us that an adaptation of Tolkien’s work would reflect what the world actually looks like.”

Which world? Why, our modern world, of course.

In the views of leftists like Weber, Middle-earth—a world heavily steeped in the ancient mythology of Tolkien’s native British Isles—should resemble 2022 New York or San Francisco. Diversity must be shoved into places it doesn’t fit; original source material be damned.

The treatment of established characters isn’t much better. Galadriel, an elf depicted by Cate Blanchett in director Peter Jackson’s “The Lord of the Rings” film trilogy, has had her personality radically shifted.

Gone is the ethereal and graceful Galadriel from Tolkien’s work. She’s been replaced by a generic fantasy warrior, a carbon copy of a million other “empowered” female characters in today’s fantasy landscape. Weber and her team seem to believe that for a female character to be strong, she must be a physically imposing warrior. In other words, she must be a man.

Yet, Galadriel radiates power in her film and book depictions without the need to make her a man.

Even worse, when devoted fans of a series like “The Lord of the Rings” point out issues with these adapted products, they are accused of bigotry for not acquiescing to the left’s butchering of their beloved franchises.

“Rings of Power” is far from the first series to intentionally alienate fans of its progenitor product. But it does constitute a new frontier in the radical left’s Sauron-esque invasion of popular culture.

Tolkien and “The Lord of the Rings” represent the bedrock upon which much of modern fantasy can build. George R.R. Martin, author of the immensely popular “A Song of Ice and Fire” series that later inspired the HBO show “Game of Thrones,” has said he was inspired by Tolkien to write epic fantasy.

By capturing Tolkien’s work for the left, the radicals are sending an ominous message to lovers of his creation: “We own this now. And we will remake it in our image.”

“Rings of Power” appears to be yet another soulless husk, devoid of the original love and care that Tolkien infused into his work and with which Jackson crafted his original “The Lord of the Rings” movies.

Ironically, Tolkien’s own work seems to depict the radical left’s corruption of popular cultural artifacts. In his “The Return of the King,” his Hobbit hero, Frodo, pontificates on the nature of Orcs, a race of purely evil creatures sent by big baddy Sauron to reclaim The One Ring: “The Shadow that bred them can only mock, it cannot make: not real new things of its own. I don’t think it gave life to Orcs, it only ruined them and twisted them.”

The radical left spreads its ideology not by genuine acts of creation, but by twisting and defiling things people love. Tolkien’s work will not be the last to be corrupted, but it should be a wake-up call to protect the series fans love.

Thankfully, this is a fight we’re winning. The response to Amazon’s trailer has been overwhelmingly negative, and fans are pushing back against the forced diversity and lore inaccuracies.

As the wise wizard Gandalf tells us, “Despair is only for those who see the end beyond all doubt. We do not.”