55,000 Female Vets Are Homeless. How This Female Vet Is Finding Homes for Some of Them. 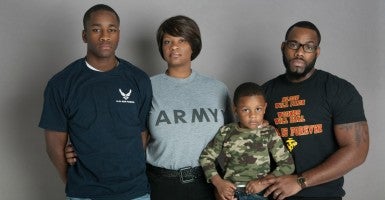 It has been 234 years since Deborah Samson donned a waistcoat and breeches and, under the alias Robert Shurtliff, became the first recorded woman in U.S. forces.

Since then, over 2 million women have served the United States with honor—and 55,000 female veterans today remain homeless, according to Finale Salute Inc.

Boothe, a U.S. Army major who served the United States for 15 years, was left stranded by an infamous perfect storm in August 2005.

Boothe was living in New Orleans as part of the Army reserves, preparing to deploy with her troops to Iraq. During the devastation of Hurricane Katrina, she lost her home and all that she owned. Only a month later, Boothe was diagnosed with advancing head, throat, and neck cancer. She endured six months of demanding and grueling cancer treatments, including two surgeries and 30 cycles of radiation.

The treatments worked; Boothe was cured. But once treatment was finished, she found herself without a home or an income.

“I didn’t have a post to go back to. I was basically homeless,” Boothe told Northern Virginia magazine. “The hospital was where I lived.”

Boothe asked the military for help but was turned away due to her veteran status.

“I was asking for resources for female veterans and veterans with children, and [they] said, well … the military doesn’t help you anymore, so you have to go to the [U.S. Department of Veteran’s Affairs].”

Unfortunately, the VA was of little help to Boothe and her son.

“All the programs were basically male-based. They sent me to social services, basically the welfare office,” Boothe told NVA magazine writer Tim Regan.

Boothe describes her subsequent visit to social services as “the most demeaning experience I’ve ever had.” She calls the limited limited options available to female veterans “unacceptable.” “While VA is taking steps—such as launching an outreach campaign—to end homelessness among all veterans, it does not have sufficient data about the population and needs of women veterans to plan effectively for increases in their numbers as service members return from Iraq and Afghanistan,” a report about homeless female veterans released by the GAO in 2011 reads.

“Further, without improved services, women—including those with children and those who have experienced military sexual trauma—remain at risk of homelessness and experiencing further abuse.”

Boothe soon began searching for permanent employment and housing for her small family, and relocated to live with her aunt in Missouri for six months.

“I was homeless for about a six month period,” Booth said in a taped interview on “The Oprah Show.” “I felt worthless. I felt thrown away. That was probably the hardest thing that I’ve ever experienced.”

In 2010, Boothe heard another story of a homeless female veteran on television and came up with the idea to begin a non-profit organization focused on ending female veteran homelessness.

She acquired a grant and called the organization Final Salute, Inc. With the money acquired, she put a lease on Final Salute Inc.’s first property.

To date, Boothe has helped over 900 female veterans and their children find homes.

“Seeing that these children are happy, they’re laughing, they’re running around playing … [t]he women are joking with each other and they’re … home. That is probably the most rewarding part,” Boothe said.

According to the American Veterans Center, Boothe will share her story with Fox News Channel National Security Correspondent Jennifer Griffin on November 14 at 8 p.m. EST. The segment, “The Wounded Warrior Experience,” will be broadcast by TheBlaze television network.