Don’t Believe a Man Can Be a Woman? Prepare to Be Labeled an Extremist 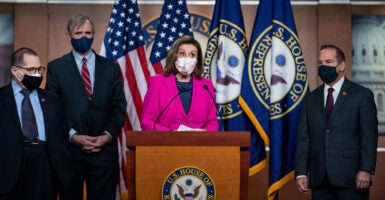 The Equality Act will make “gender identity” among the protected categories of discrimination and segregation in places of public accommodation. Pictured: Speaker of the House Nancy Pelosi, D-Calif., speaks at a press conference, ahead of House passage of the Equality Act, with Senate Majority Leader Chuck Schumer, D-N.Y., on Feb. 25. (Photo: Kent Nishimura/Los Angeles Times/Getty Images)

The Biden administration, Democrats in Congress, and their media elite seem to be deeply obsessed with redefining American society and civil rights law by promoting policy and legislation that give credence to the claim that “gender identity” is fluid and subjective. But the insanity doesn’t stop there. It seems they won’t be happy until you believe a man can be a woman, too.

The erroneously named Equality Act was passed this February by a Democrat-led House of Representatives for the second time in less than two years, and now awaits confirmation in the Senate.

The legislation amends the Civil Rights Act of 1964 by replacing “sex” with the terms “sex, sexual orientation, and gender identity,” making “gender identity” among the protected categories of discrimination and segregation in places of public accommodation.

If this bill passes, the insanity we have witnessed since the Obama administration—biological males in female safe spaces like locker rooms and on sports teams—will be enshrined into our civil rights law. Public facilities will be forced to allow a man who “self-identifies” as a woman to use and benefit from the same facilities, programs, or funding that biological women do.

“Self-identification” means there are no legal or medical standards to reach under this legislation; if a man says he’s a woman, presto, he’s a woman.

But this obsession with the mainstreaming of transgender ideology is part of an angry movement that goes beyond legislation to the insidious monitoring and influencing of your belief—whether it is based on religion, conscience, or science.

From social media bans for the “hateful conduct” of those saying (in accordance with science) that a man can’t actually be a woman to a New York Human Rights Law imposing fines of up to $250,000 for “misusing” a “preferred” pronoun, the transgender movement has become a vehicle for censorship, conformity of thought, and control.

Even U.S. military leadership has labeled those who challenge gender identity or sexual orientation as “extremist.” It makes ordinary citizens, just trying to live and let live, afraid to speak reason and truth.

You can also find this insidiousness of the censorship in Section 2, “Findings and Purpose,” of the Equality Act, where Congress opines on why we need the legislation. The findings read that “many people” are subjected to discrimination on the “basis of gender” because of “others’ perceptions or beliefs.” It continues, “Even if these perceptions are incorrect, the identity imputed by others forms the basis of discrimination.”

According to this interpretation, if you see a man and assume he’s a man, you shouldn’t do that, because that could be discrimination or a “sex-based stereotype.”

Really? How is it discrimination if any American citizen, based on belief in science, conscience, or religion—take your pick—doesn’t believe, and never will believe, that a man can be a woman, or vice versa? Or that gender is a matter of ever-changing “self-identification”?

Although Section 2 is not a binding part of the proposed law, it clearly plants a seed to influence its interpretation, blurring the line between personal belief about transgenderism and biological sex, and an actual action of discrimination.

Moreover, when courts are deciding difficult legal cases, they often refer to the legislative history of the law, which can include the findings or studies about the law in question.

It may be hard to see how this insidious and continual monitoring of belief affects you until you remember Jack Phillips the baker. He has spent almost a decade fighting as a private business owner to create whatever kind of cakes he wants that agree with his Christian faith.

It may still be difficult to see until you lose your job because your conscience won’t allow you to call a female a male; or your funeral home is penalized by the Supreme Court because you don’t want a man in a skirt attending grieving clients; or your doctor is forced to give a child sex-reassignment surgery; or you lose parental custody because your teenager wants to “transition.”

The well-known feminist Natasha Chart, former leader of the Women’s Liberation Front, says that those who disagree with the militant transgender movement, on both sides of the political aisle, feel alone, but are really the “silenced majority.”

Let’s just hope the majority will not allow itself to be silenced.