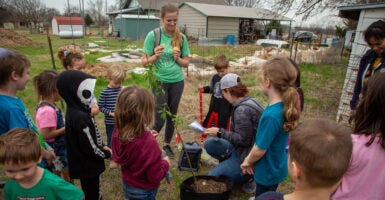 Natalie Simmons and co-op participants learn what plants are edible at the Muddy Feet Farmstead during a visit last April. (Photo: Natalie Simmons)

Natalie Simmons, a single stay-at-home mom, says she has no idea what public school her two children would attend in McKinney, Texas, a suburb of Dallas.

She chose another way to provide a good education to her daughters, Harlow, 7, and Harper, 5.

Simmons, now 40, began sending her two kids to Castle Montessori of McKinney when Harper was only 18 months old.

She says she liked the Montessori school’s child-led, unstructured environment and its emphasis on science, technology, engineering, and math projects.

Simmons then sent the children to Mom’s Day Out, an affordable day school at Cottonwood Creek Church in Allen, Texas, another suburb near McKinney.

The children’s last stop in brick-and-mortar schooling in the fall of 2019 and spring of 2020 was The Children’s Workshop, a Montessori-themed school in Plano. The school closed due to the COVID-19 pandemic, Simmons says.

In March 2020, when schools throughout Texas sent children home to do remote learning, Simmons says, her attitude toward traditional education—even Montessori-themed schooling—changed.

“We never went back after spring break,” she recalls.

Simmons says that school requirements that children wear masks during the pandemic became a “nonnegotiable” for her.

As a grown woman, Simmons says, she had trouble wearing a mask for a lengthy amount of time.

“What do you think a child is going to do?” she asks. “Sending my children back [to school] with masks on was unacceptable and not going to happen.”

Searching for a Co-Op

In July 2020, Simmons signed up her children for a co-op meeting at Obstacle Warrior Kids, a Dallas-based recreational facility.

A co-op is a group of moms who get together to teach each other’s children. A co-op typically acts as a supplemental “social learning” option for homeschooled children.

Obstacle Warrior Kids “is a perfect place for a co-op because in between classes, kids can go blow off steam,” Simmons says. “I signed up immediately.”

The moms were “crunchy, hippie, and homeopathic and adopted a gentle parenting lifestyle,” Simmons says, which resonated with own lifestyle.

“That community felt really great,” Simmons says. “The woman who started the co-op made it look effortless.”

But after exploring several co-ops, Simmons says, she felt compelled to surround her family with like-minded people.

For instance, when the new coronavirus first erupted in the U.S., it was wise to be on high alert, she says. But as time passed and more information about COVID-19 was revealed in summer 2020, she recalls, she felt alone in questioning the media’s narrative about the disease.

Harlow and Harper had not seen their best friends from their previous school in about six months, because their moms were quarantining them, Simmons says.

“Back then, you were kind of seen as an outcast because you were fighting back [against] the system,” Simmons said. “I myself was not going to wear a mask because the mainstream media’s narrative wasn’t adding up. It wasn’t logical.”

Inspired to act, Simmons started her own co-op, called Silva, in fall 2020.

The first semester, Simmons aimed to sign up about 30 families in Collin County, Texas—totaling about 60 children. Silva ended up attracting 45 families, or about 90 kids.

Within three semesters, Silva’s size nearly tripled to about 240 children, and the co-op now has four chapters in the Dallas-Fort Worth area.

Permaculture is a natural approach to land management that adopts what are called slow and simple principles.

After meeting Nicholas Burtner, founder of the School of Permaculture in Plano, Texas, Simmons began taking 40 online courses there to obtain a certificate in permaculture design. Burtner provided her with a scholarship.

In spring 2020, Simmons’ two children helped with a project at Grateful Farmstead, a property owned by a friend of Burtner’s in the Dallas suburb of Greenville. In exchange, Burtner taught the children about permaculture.

“I don’t want my kids to grow up on instant gratification,” she says, noting how quickly Amazon packages can arrive.

Before focusing on permaculture, Silva was a nature-based co-op. The kids played in the woods and learned about creatures such as bats and frogs.

“Fun nature stuff,” Simmons says. “The kids will get dirty and take some risks, and they might get hurt, but risky play is very, very important for cognitive development and mental health, actually. Kids’ taking risks and working through them takes away a lot of anxiety.”

Silva now meets at various nature preserves and farms across the Dallas-Fort Worth area once a week between noon and 3 p.m.

Silva is not a drop-off environment: At least one parent must remain with a child or children.

Silva charges each family—not each child—$125 per semester. If a family wishes to join two chapters, the price increases to $175.  For three chapters, it costs $200.

Although Simmons makes a profit, she says the money helps pay for supplies—nature toys, farm supplies, tables, chairs, giant hammocks, and swings—and her gas money so she can drive to the various counties.

“Some of these places, I drive an hour and a half to get there,” she says.

“It’s a full-time job,” she adds. “I absolutely would not want to do anything else with my life. I absolutely love it, but I did find a way for me to continue to be able to stay at home.”

Each state has different rules governing co-ops, including their funding. Although Texas doesn’t provide any government funding for co-ops, the state has lenient rules that make it easy to start one.

Alaska is among states that provide co-ops about $3,000 per child. This is because Sarah Palin, a Republican who was governor of Alaska from 2006 to 2009, is a homeschooling advocate and homeschooled her own children.

‘Exactly What I Wanted’

Simmons says she has seen Harlow learn how to climb trees, build fires, and introduce herself to new families in the co-op and make them feel welcome.

“Their logic, their ways to figure things out, and get creative and find solutions is admirable and outstanding,” Simmons says of her kids. “It’s exactly what I wanted for them.”

Another parent, Reyna Mendoza, discovered Silva on Facebook. Her 9-year-old son, Chris, attends the Tarrant County co-op on Tuesdays and does the rest of his schooling at home.

Texas’ mask mandate was the tipping point where she decided to homeschool Chris, Mendoza says, specifically because she was not able to walk him to class.

This would include learning fractions or decimals, for example.

Mendoza also incorporates hands-on activities, such as baking cookies, to teach these concepts to her son.

“I saw the pace and how [Chris] can learn a lot better when [the education] is one-on-one,” she says.

But because of the co-op as a supplement to her son’s learning, Mendoza says Chris no longer is shy.

The co-op organizes weekend camping trips in the summer to teach survival skills in the wilderness near big lakes such as Lake Texoma, she says.

On one camping trip, Chris learned how to start a fire and what foods and plants to eat. He’s doing a lot of things other children aren’t learning, his mother says.

“They’re learning the basics at home, but I wanted them to learn survival skills and different things,” Mendoza says of Chris and his younger sister, Natalie. “I showed up to one of her events and we liked it and continued.”

Another parent, Karly Meador, says her 6-year-old son, Jordan, also used to be shy and withdrawn, but is more social since joining the co-op in the fall. Meador says she found out about the co-op from Facebook.

Like Simmons, Meador says she has “no idea” what public school Jordan would attend in Dallas.

The family of three recently moved to Dallas from the suburb of Savannah. Because Jordan has severe asthma, he cannot wear a mask all day.

Parents are starting and joining co-ops so that their children can get proper socialization while receiving a solid education in a shorter amount of time.

Because of the rise of homeschooling, “everybody is starving for group time,” says Jube Dankworth, chief operating officer of Texas HOME Educators.

“I’ve seen working moms do homeschool and other moms farming out to pods,” Dankworth says.

A pod is when several families—perhaps four or five—set up a microschool for their children and hire a teacher.

What’s indisputable, given the experiences of these families, is that a change has occurred in how Americans view traditional brick-and-mortar public schools. 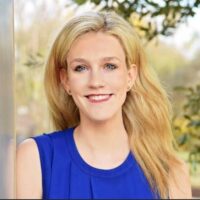 Melanie Wilcox is a freelance writer and journalist.