In Surprise Visit to Texas, First Lady Looks After Children at Border 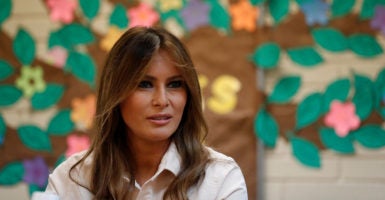 After media fallout and heightened emotions over the Trump administration’s “zero tolerance” policy at the southern border, first lady Melania Trump decided to see for herself.

The first lady touched down Thursday morning in the border town of McAllen, Texas, pulling off an impressive surprise visit that was not leaked beforehand.

“I’m here to learn about your facility, [where] I know you house children in a long-term basis. And I’d also like to ask you how I can help these children to reunite with their families as quickly as possible,” Trump said to officials at Upbring New Hope Children’s Center in McAllen, which is run by Lutheran Social Services of the South.

BREAKING: @FLOTUS makes unannounced trip to Texas to see first-hand the children/families at the border pic.twitter.com/BKXCg5sFjL

The lack of leaks from the first lady’s office isn’t exactly shocking, but continues to be in stark contrast to the West Wing.

The first lady previously went to Texas in the aftermath of the devastating Hurricane Harvey.

Stephanie Grisham, communications director for the first lady, said in an email to reporters that she planned the trip before her husband signed an executive order Wednesday afternoon to address the issue of children being separated, in some cases, from parents who entered the country illegally.

“I don’t know what she knew. She knew what she wanted to do and she told us,” Grisham said of the first lady, adding:

She’s seen the images. She’s heard the recordings … she was on top of the situation before any of that came out. She was concerned about it.

.@FLOTUS: "Thank you so much. I'm looking forward to meeting children and touring the facilities." pic.twitter.com/oRDbX7XOzH

Reporters were allowed to sit through the first lady’s briefing, during which she asked multiple questions of officials.

“How often do the children get to call and talk to their families?” she asked at one point.

The president discussed the first lady’s visit at the beginning of his Cabinet meeting Thursday afternoon.

“My wife, the first lady, is down now at the border because it really bothered her to be looking at this … as it bothered me, as it bothered everybody at this table,” Trump said.

The first lady announced an initiative called Be Best in May. It encompasses multiple issues children face, including well-being, social media use, and opioid abuse.