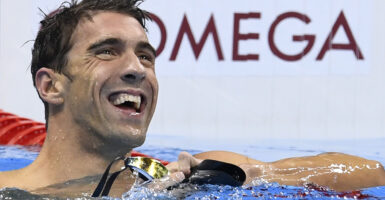 Asked about a biological male who competes on a women’s swim team, Olympian Michael Phelps, pictured Aug. 12, 2016, at the Rio Games, said he would like everybody "to compete on an even playing field." (Photo: Christophe Simon/AFP/Getty Images)

Swimmer and Olympic gold medalist Michael Phelps says sports should be played on an “even playing field.”

During a recent interview with CNN, Phelps was asked to give his opinion about University of Pennsylvania swimmer  Lia Thomas. Thomas is a biological male who competed as a male for three years before switching to the women’s team in 2020, after completing the required one year of testosterone-suppression treatment.

Thomas has dominated the female competition in recent meets and broke two national records in December.

Phelps says he believes everyone should be able to feel comfortable in their own skin, and “the one thing I would love is everybody being able to compete on an even playing field.“

Today on “Problematic Women,” we discuss Phelps’ remarks and the debate over biological males competing in women’s sports. Also on today’s show, we break down a few of the COVID-19 conspiracy theories that have turned out to be true.

Plus, the March for Life is Friday. Learn why a progressive D.C. restaurant canceled a pro-life group’s breakfast reservation.