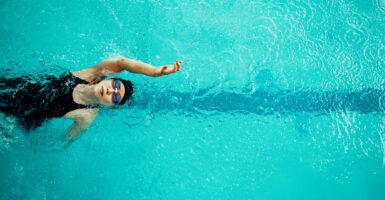 A transgender athlete, Lia Thomas, dominated during a Nov. 20 women’s swim meet with athletes representing Cornell, Princeton, and the University of Pennsylvania.

Thomas, a biological male who identifies as a woman, set new Ivy League records for the women’s 500 and 200 freestyle and smashed numerous UPenn records in women’s swimming.

In the 1650 freestyle final, Thomas, who used to swim on UPenn’s men’s team as Will Thomas, blew the competition out of the water—finishing first with a devastating, 38-second lead.

Sadly, stories such as this one have become more common. If the Biden-Harris administration has its way, they could become the rule.

Just a few weeks after Thomas trounced biologically female teammates, President Joe Biden’s Department of Education announced plans to amend Title IX regulations to conform to the president’s executive order on what it calls “Preventing and Combating Discrimination on the Basis of Gender Identity or Sexual Orientation.”

Such amendments by the Education Department would allow biological males to compete against women in the name of “equality” and “preventing discrimination.”

But the truth is, these amendments would contradict reality, equality, and popular opinion.

Hormone levels alone don’t make someone a woman. And no amount of cross-sex hormones can undo the biological benefits of male genetics and development.

A 2020 study by the BMJ, formerly the British Journal of Medicine, shows that male athletes who are “transitioning” retain a competitive edge against women even after two years of taking estrogen.

In earlier days, one wouldn’t have needed a scientific study to prove the point. Thomas’ 38-second lead in the freestyle speaks for itself.

And yet, gender ideologues continue to deny reality.

Despite the science, the NCAA—and the International Olympics Committee—requires that a biological male’s testosterone must be suppressed for only one year before that male is free to compete against women.

Like the NCAA, the Biden administration’s latest announcement denies the science of biological sex.

However, denying the truth has consequences. Specifically, the denial of sexual reality robs women of the very opportunities protected by the federal law known as Title IX.

Title IX also is credited with decreasing dropout rates for women and increasing the number of women in higher education.

Allowing trans-identifying biological males to compete in women’s sports, or for women’s scholarships, reverses this progress.

Thomas’ drubbing of female swimmers in the Ivy League is just the latest example. The female athlete who would have placed first ended up placing second—to Thomas, a biological male with a proven biological advantage.

Imagine if Thomas had competed against Ledecky and performed at a personal-best level. The world might never have come to know of Ledecky. Now imagine how many women athletes would miss out on scholarship and career opportunities if forced to compete against biological males in every contest. This is the world the White House seeks to usher in.

Polling shows that 67% of Americans oppose allowing biological males who identify as transgender to compete in girls and women’s athletics. Twenty states are suing the Department of Education over the new regulations.

Over 37 states have introduced bills to keep women’s sports for women. Nine have passed such bills.

The Biden administration and its gender-activist allies made their unpopular view clear from Day One. The administration won’t be content to stop at changing Title IX regulations. It will go on to rewrite the law to force female athletes across the nation to compete against biological males.

Barring that, the White House will seek to change the law piece by piece. It will be the death of women’s sports by a thousand cuts.

Enough is enough. As we prepare to celebrate the 50th anniversary of Title IX next year, elected officials should stand up for women, for reality, and for the American public.