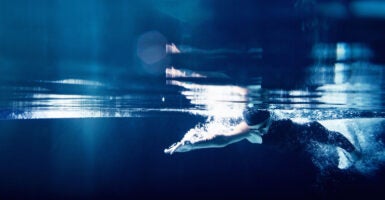 The sudden success of a transgender female athlete—after an average career competing as a man—demonstrates that the rules are inequitable for women’s sports and require revision. (Photo: Stanislaw Pytel/ Digital Vision/Getty Images)

A transgender swimmer at the University of Pennsylvania has been dominating women’s competitions since he opted to swim against women, even though he was just an average swimmer when he competed on the men’s team.

Lia Thomas—formerly known as Will Thomas—swam for the men’s team previously, but now competes on the women’s team and against biological women.

In Thomas’ first Ivy League meet as a transgender woman, he swept a number of events. Thomas won the 100-, 200-, and 500-meter freestyle events, and the free relay event, breaking the University of Pennsylvania’s previous records in some.

Penn’s Lia Thomas blasted the number one 200 free time and the second-fastest 500 free time in the nation on Saturday, breaking Penn program records in both events. She swept the 100-200-500 free individual events and contributed to the first-place 400 free relay in a [three-way meet] against Princeton and Cornell in her home pool. Penn split for the day, beating Cornell 219 to 81, but losing to Princeton, 106 to 194.

There are rules and regulations about transgender athletes at the collegiate level, but surely Thomas’ sudden success as a transgender athlete—after an average career competing as a man—demonstrates that they are inequitable for women’s sports and require revision.

In 2015, the International Olympic Committee ruled that biological males who identify as female could compete on female teams if their testosterone levels were below a specific level. The National Collegiate Athletic Association also has requirements about testosterone, but they’re more general.

A transgender female student athlete being treated with testosterone-suppression medication for gender identity disorder or gender dysphoria and/or transsexualism, for the purposes of NCAA competition, may continue to compete on a men’s team, but may not compete on a women’s team without changing it to a mixed-team status until completing one calendar year of testosterone-suppression treatment.

Even if Thomas has taken testosterone-suppression treatment for a year prior, his race times still show a clear physiological advantage. In his 200 free meter swim, Thomas won with a time of 1:43.47, “the second-fastest women’s 200 free time in the nation so far this season,” a whopping 6.1 seconds ahead of the second-place winner, and Thomas’ teammate, Bridget O’Leary. Thomas broke the previous record set by Harvard swimmer Samantha Shelton in 2019. Her time was 1:45.15.

It’s true there are only a small number of transgender athletes competing against women at the high school and college level, but the trend does seem to be growing.

Thomas’ and other seemingly isolated cases show that it only takes one transgender female athlete to tip the balance of an entire female team, ensuring he wins many of those competitions while biological women who previously competed for first place take second at best.

Texas lawmakers debated exactly that issue during the last regular session of the Legislature and special sessions that followed. Republican lawmakers tried (and eventually succeeded) in passing HB 25, a bill that protects women’s sports. But up until that point, Democrats had succeeded in killing previous versions, citing the bill’s divisiveness or supposedly being unnecessary.

A Texas Tribune article in October stated, “Opponents of the legislation have called it unnecessary because there aren’t that many transgender athletes currently participating in school sports and interscholastic competition in Texas. But their objections weren’t enough to stop HB 25 from being resurrected [in] special session after special session this year.”

Thomas has already shown he’ll dominate the University of Pennsylvania’s women’s swim team, forcing his biologically female teammates and competitors to take second place. While that may not be happening enough yet nationwide to demonstrate a strong trend, it does occur often enough to hurt women’s sports and to tip the equity scale toward biological males.

Women’s spaces in sports must be protected.