Gingrich Explains Why C-SPAN Was the Twitter of the ’90s 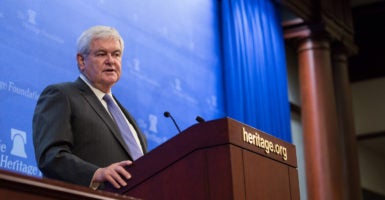 “The polarization around Trump is just a taste of what is coming because the truth is that the left is so out of touch with reality that every time you try to tell the truth, you are automatically smeared and assaulted and attacked,” former House Speaker Newt Gingrich says. (Photo: The Heritage Foundation/Willis Bretz)

Twitter might not have existed when Newt Gingrich was speaker of the House of Representatives, but the long-time politico partially attributes his own success to knowing how to communicate.

“The raw parallel between the liberating impact of C-SPAN starting in April of ’79 and the liberating impact of Facebook and Twitter [shows it] is very likely [President Donald] Trump could not have won if there wasn’t social media,” Gingrich said at an event Monday at The Heritage Foundation with Craig Shirley,  author of the new book “Citizen Newt.”

“Similarly, I don’t think we would have emerged without C-SPAN,” he added, referring to the cable channel that covers proceedings in the House and Senate.

Then I would go back and do special orders, outlining the strategy and then they would write the speeches, and then I would put the speeches in the record. And so you had a constant process of mutual reinforcement which worked pretty well.

Strategy and communication considerations were central to Gingrich’s 1994 Contract with America, which was signed by 367 Republican candidates for the House. The contract included an agenda for Republican leadership, such as  tax relief, term limits, and a balanced budget.

“You have to design a campaign because you know the news media is against you,” Gingrich said. “So every issue has to be 70 or 80 percent to your advantage.”

“For example, welfare reform has always been a winning issue. By the time we were done, it was at 92 percent approval.”

Gingrich detailed how important polling was for determining what was in the Contract with America, and what wasn’t:

We sat down and wrote up the contract that was a series of things that could be memorized by normal people, each of which was [at] 70 percent [approval] or better. If you were below 70 [percent] you didn’t make the contract.

I happen to be strongly pro-life and I am very much in favor of voluntary school prayer—I think we would be a better country if we had it—but I also knew those two [issues] would allow The New York Times to avoid every popular issue and polarize us as social right-wingers, and we frankly would not have won.

A large part of the battle is combating the media’s narrative, Gingrich said, and Trump is a case in point.

“The polarization around Trump is just a taste of what is coming, because the truth is that the left is so out of touch with reality that every time you try to tell the truth, you are automatically smeared and assaulted and attacked, and there is a radicalization under way.”

Gingrich also reflected on his political career and his vision for the country’s future, which he said he began pondering as a teenager.

“Between my freshman and sophomore year of high school … I had essentially three goals: to create a Republican majority, to replace the welfare state, and to defeat the Soviet empire,” Gingrich said:

This vision framed Gingrich’s leadership style when he went to Washington in 1978 after being elected to Congress to represent Georgia’s 6th Congressional District.

“When I arrived in December of ’78, we [Republicans] had already been in the minority for 24 years. And so I went to the chairman of the [National Republican] Campaign Committee and said, … ‘We ought to have a plan to become a majority,’” Gingrich said.

Moving forward to today’s political climate, Gingrich said he is “optimistic” that conservative ideals will succeed.

“Now I am strategically optimistic that 350-320 million free people in the end are going to decide that Chinese authoritarianism and Islamic dictatorship aren’t acceptable futures, and so we will eventually in our own good time, to paraphrase Churchill, ‘Get our act together.’”