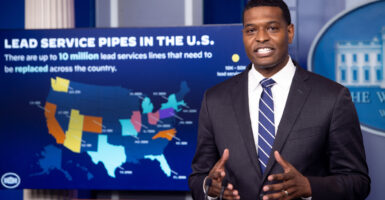 After the Environmental Protection Agency dumped advisers from regulated industries, the federal agency appears to have prioritized gender and ethnic diversity to replace them, EPA documents show.

The U.S. District Court for the District of Columbia heard arguments Wednesday in the case of Young vs. EPA. The lead plaintiff in the case, Stanley Young, was ousted in March from the EPA’s Science Advisory Board weeks after President Joe Biden took office.

Young’s lawsuit identifies the EPA panels in question as the Science Advisory Board and the Clean Air Scientific Advisory Committee.

According to an EPA memo from June that emerged through the discovery process in the lawsuit, the clean air committee was to be made up of “three minorities, four non-minorities, five women and four men.”

The EPA memo goes on to say that two of the women “would bring gender diversity” and two would “bring gender and ethnic diversity as well as fresh perspectives.”

After the Biden administration “purged” members from EPA’s Clean Air Scientific Advisory Committee, the complaint says, it moved to replace them with members who represent entities that get EPA grants.

The plaintiffs say the action violates the 1972 Federal Advisory Committee Act, which requires that each board or committee must be “fairly balanced in terms of the points of view represented and the functions to be performed by the advisory committee.”

Gender and racial composition of advisory panels was not part of the law, noted Steve Milloy, senior policy fellow at the Energy & Environment Legal Institute and author of the book “Scare Pollution: Why and How to Fix the EPA.”

“Gender and race wasn’t part of the complaint originally, but the information became clear during discovery that the EPA was less concerned with diversity of opinion than with diversity [of race and gender],” Milloy told The Daily Signal.

More importantly, Milloy said, advisory committees for federal agencies are not supposed to be made up only of like-minded individuals—particularly those receiving grants from the agency they advise.

“When Congress mandated the EPA take independent advice, they didn’t anticipate the EPA stacking the membership with one point of view,” Milloy said after watching the court hearing. “The depths of the stacking are incredible. So many are grantees.”

EPA Administrator Michael Regan ousted Young and other members of the advisory committees in March.

Regan also booted Tony Cox, who had been chairman of the clean air committee. Cox joined Young as a plaintiff in the suit in late October.

A June memo from Thomas Brennan, director of the Science Advisory Board’s staff office, said: “As part of Administrator Regan’s reset of CASAC [Clean Air Scientific Advisory Committee] membership, all seven CASAC members were dismissed on March 31, 2021. A public solicitation of nominations and public comments on prospective candidates have been completed.”

According to EPA’s website, the clean air committee is managed by the Science Advisory Board’s staff.

Brennan’s memo goes on to say: “In this membership package, CASAC has three minorities, four non-minorities, five women and four men. CASAC also has members from six of the agency’s 10 regions.”

Brennan then writes that appointing Elizabeth A. Sheppard, as chair of the Clean Air Scientific Advisory Committee would “bring gender diversity.”

Sheppard is a professor in two departments–environmental and occupational health sciences and biostatistics–at the University of Washington. Brennan also notes her “significant experience” chairing such panels before.

In a declaration to the court, Sheppard wrote: “I do not currently have any grant funding from the EPA,” but added that “EPA grants have paid a portion of my salary through awards made to the University of Washington.”

The EPA panel chair adds: “I cannot imagine any circumstance where receipt of a grant would influence or has influenced in any way my activities on CASAC or any other EPA panels.”

The memo said that Michelle Bell, a professor of environmental health at the Yale University School of the Environment, “Would bring gender diversity.” It also said she has expertise in  biostatistics and environmental engineering.

Brennan’s memo also says Judith Chow, a research professor at the Desert Research Institute in Nevada, has expertise in air quality, is a former committee member, and would “bring gender and ethnic diversity.”

Christine H. Fuller, an associate professor of environmental health at Georgia State University, has expertise in epidemiology and the health effects of air pollution, according to the memo.

Brennan says that Fuller would “bring gender and ethnic diversity as well as fresh perspectives,” because she hasn’t served on the clean air panel before.

The EPA staff director’s memo says that Alexandra Ponette-González, an associate professor of geography and the environment at the University of North Texas, has expertise in ecology. She would “bring gender and ethnic diversity as well as fresh perspectives,” he says.

The clean air committee has only seven members and cannot possibly include a representative for every stakeholder that would be affected by any potential regulation, argued John Robinson, a Justice Department trial attorney representing the EPA in court.

“The plaintiffs have not shown the agency abused its discretion to select the committee,” Robinson said, adding: “The plaintiffs would have the court rewrite the statute for a requirement that there be an industry representative when Congress specifically declined to do so. … The plaintiff emphasized a race and sex discrimination claim here. There is no basis in the administrative record for such a claim.”

“Rather than follow the science, the EPA purged any dissenting industry voices from an important advisory committee on air pollution,” Shumate said, adding:

What’s worse is that in reconstituting the committee, EPA engaged in discrimination on the basis of race and sex. … The EPA purged from the committee any industry representatives and packed the committee with professors who receive millions of dollars in EPA grants and share EPA’s predetermined goal of strengthening air quality standards.

The plaintiffs asked the judge for a preliminary injunction to stop the clean air committee from moving forward. Shumate stressed that balanced opinions was the only factor EPA was required to consider in appointing members to the advisory committee.

“The EPA ignored this factor and instead reconstituted the committee on the basis of irrelevant and improper fact—the race and sex of the nominee,” he said.