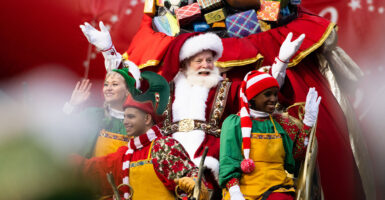 The city of Taylor, Texas, is considering a policy that may bar Christian groups from cosponsoring Christmas parades, Texas Values warns. The city did not respond to a request for comment. Pictured: Santa Claus attends the 2022 Macy's Thanksgiving Day Parade on Nov. 24, 2022, in New York City. (Photo: Noam Galai/Getty Images)

A small Texas city near Austin is about to vote on a policy that may prevent Christian groups from sponsoring Christmas parades, according to the conservative group Texas Values.

The policy, listed as Agenda Item #13 on the agenda for the Dec. 8, 2022, meeting of the city council in Taylor, Texas, stipulates what kind of groups can cosponsor events alongside the city. The guidelines require nonprofit organizations to allow people who identify as LGBT on their boards and in the document, the city reserves the right to reject sponsorships for a variety of reasons, including on the basis that organizations “represent religions or political views.”

“Bowing to radical ‘woke’ ideology seems out of place in a small town like Taylor where past parades have focused on Jesus’ birth,” Jonathan Covey, director of policy at Texas Values, told The Daily Signal in a statement on Thursday. “People here celebrate Christ during Christmas and don’t want the city council to harm churches and people of faith by passing this SOGI [sexual orientation and gender identity policy]. All they want for Christmas is their constitutional right of religious freedom.”

The city did not respond to The Daily Signal’s request for comment by press time.

Texas Values sounded the alarm over two particular areas of the “Guidelines” for “Requesting City Co-Sponsorship of Special Events,” which begins on page 269 of the agenda document.

According to the guidelines under “General Relevance,” the policy states that a nonprofit organization “must have programming, administrative practices, and board membership that does not discriminate based on race, color, religion, national origin, sexual orientation, gender identity, citizenship, familial, disability, or veteran status.”

This would apparently exclude any conservative Christian, Jewish, or Muslim organization that requires board members or leaders to adhere to traditional codes of sexual ethics prohibiting sexual behavior between people of the same sex or prohibiting men from dressing or identifying as women. The Christian Bible and the Jewish Torah expressly forbid these practices (Lev. 18:22, Deut. 22:5, Romans 1:26-27, 1 Corinthians 6:9-10, 1 Timothy 1:9-10), and many Muslim interpretations of the Hadith endorse extreme penalties against those who engage in homosexual activity.

This language also appears to require nonprofit organizations to adopt policies such as allowing males who claim to identify as female into women’s restrooms or changing rooms.

Texas Values also pointed to a passage underneath the requirement that cosponsored events must be “Safe, Livable, and Family-Friendly.”

“The City reserves the right to reject a sponsorship request at any time,” the document states. “Examples of requests that are typically deemed ineligible include, but are not limited to individuals, organizations, and/or businesses who promote hatred against individuals or groups, represent religions or political views, candidates and campaigns, and those whose primary products or services are derived from the sale of tobacco, alcohol, drugs, firearms, gambling, or sexually explicit or inappropriate materials. For-profit organizations are not eligible for sponsorship even if some proceeds are donated to non-profit organizations.”

The city did not respond to The Daily Signal’s request for comment about whether such a policy would prohibit Christian organizations from co-sponsoring Christmas parades.