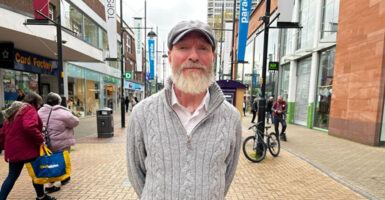 England's Crown Prosecution Service claimed that certain Bible passages are "no longer appropriate in modern society" in a case against street preacher John Dunn, who cited 1 Corinthians in a discussion with a lesbian couple. (Photo courtesy of Christian Concern)

A Christian street preacher faced charges of violating the Public Order Act by engaging in “threatening,” “abusive,” and “insulting” speech in telling a lesbian couple that homosexuals will not “inherit the kingdom of heaven,” citing the Bible. In defending the case against him, a prosecutor wrote that “there are references in the bible [sic] which are simply no longer appropriate in modern society and which would be offensive if stated in public” (emphasis original).

The court dismissed the case against the preacher, John Dunn, because the lesbian couple declined to testify, but a prosecutor with the Crown Prosecution Service, the office of England’s government prosecutors, claimed before the trial that some Bible passages are “no longer appropriate in modern society.”

When reached by The Daily Signal, a CPS spokesperson declined to address the claim.

“On the day of the trial the complainants could not be located to provide vital evidence for the prosecution, which resulted in us offering no evidence,” a CPS spokesperson told The Daily Signal. “It is not the function of the CPS to decide whether a person is guilty of a criminal offence, but to make fair, independent and objective assessments of the evidence to put our case before the court.”

The spokesperson did not respond to multiple questions about whether England’s official government prosecution office endorses the claim that some Bible passages are “no longer appropriate in modern society.” Prosecutors made the claim in a document sent to the defense, not stated in court, but the office did not disavow the claim, nor apologize for making it.

“The non-response from the CPS speaks volumes,” Andrea Williams, chief executive of the Christian Legal Centre, which represented Dunn in the case, told The Daily Signal. “The CPS should be offering a full explanation and apology, not ducking the seriousness of what they have wanted to argue against the Christian faith in court.”

“This would not happen to another sacred text, such as the Quran,” Williams added. “This is a war on Christian culture, with the aim of removing it from the public square. If the CPS had won, this would have set a precedent that put Christians on the wrong side of the U.K. law.”

The United Kingdom does not have a First Amendment to protect free speech, although the Christian Legal Centre cited the Human Rights Act and the European Convention on Human Rights in defending Dunn’s free speech and religious freedom. The prosecution argued that Dunn impinged on “the similarly protected rights of the aggrieved parties.”

According to Christian Concern, an organization connected to the Christian Legal Centre, the case traces back to Nov. 1, 2020, when two women walked past Dunn, holding hands. Dunn told them, “I hope you are sisters,” at which point they replied that they were in a same-sex marriage.

According to Dunn, he replied out of “genuine concern for the women” that “It says in the Bible that homosexuals will not inherit the kingdom of God” (see 1 Corinthians 6:9-10). He insisted that he intended to declare God’s truth out of love and compassion for the couple.

The women reported Dunn to the police, describing his comments as “biblical speak.” They alleged that Dunn had shouted at them, “You are going to burn in hell,” referring to one of them as “devil woman.” Dunn categorically denied making either comment. Christian Concern noted that Dunn “lost his voice box following throat cancer,” so he would not have been able to shout at the women.

“Defendant denies saying to the women that ‘they will burn in hell’ or to one of them ‘you are a devil woman’ – presumably because this would be ‘crossing a line’ into unacceptable behaviour,” Hoyle wrote. “It is precisely these phrases which form the crux of the prosecution case.”

“The Crown does contend that ‘you will burn in hell’ is intrinsically threatening, as well as abusive and intimidating,” Hoyle added. “Targeting comments through a megaphone at specific members of the public is similarly behaviour which the court can legitimately conclude is disorderly. The complainants are clear that the behaviour was ‘offensive’ and ‘upsetting’ – clearly consistent with an interpretation of ‘Harassed, alarmed or distressed.'”

“Whether a statement of Christian belief or not, the Court is being asked to consider whether the language has the potential to cause harassment, alarm or distress,” Hoyle added. “This document is not the forum for religious debate, but the bible contains other material recognising slavery (Exodus 21:7), the death sentence (Exodus 35:2 and Leviticus 24:16) and cannibalism (Deuteronomy 28:27). There are references in the bible which are simply no longer appropriate in modern society and which would be deemed offensive if stated in public.”

Hoyle did not explain why passages “recognising” various practices are supposedly inappropriate in modern society. While passages in the Bible allowed slavery, the Bible also set down principles that encouraged the abolition of slavery.

Hoyle’s Bible passages suggest a level of biblical illiteracy. His slavery passage—Exodus 21:7—stipulates that a Jewish man may sell his daughter as a servant, but the passage adds that he cannot sell her to foreigners (differentiating the practice from modern views of slavery). One of his passages on capital punishment involves Moses saying that anyone who works on the Sabbath should be put to death, something Christians consider to have been superseded by Jesus’ teaching in the Gospels.

Deuteronomy 28:27 does not mention cannibalism, but rather God punishing the Israelites with tumors if they disobey His commandments. The passage goes on to mention cannibalism (Deut. 28:53-57), but not as an endorsement of the practice. Rather, the passage prophesies that if the Jews disobey God, a foreign army will besiege them and they will resort to cannibalism “because of the suffering your enemy will inflict on you.”

Hoyle did not explain why any passages noting the existence of now-defunct slavery laws or death sentences, or predicting the horrors of cannibalism are “no longer appropriate in modern society.” He did not put forth a standard for endorsing or condemning Bible passages, but his decision to include this statement suggests that he considers 1 Corinthians 6:9-10 to be inappropriate in English society.

CPS did not respond to The Daily Signal’s question about the prospect that other street preachers may face similar prosecution if they cite certain Bible passages that CPS considers inappropriate for modern society.

Williams, the Christian Legal Centre CEO, argued that “The view from the CPS was that the Bible is offensive and contains illegal speech which should not be shared in public.”

England’s government prosecution office had the opportunity to disavow the statement and clarify that it does not consider the Bible offensive and illegal, but it declined to do so.