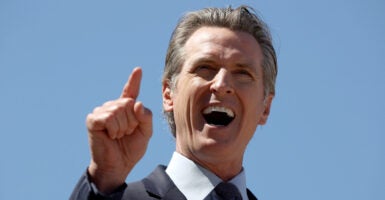 “I am outraged by [Friday’s] U.S. Supreme Court decision allowing Texas’s ban on most abortion services to remain in place, and largely endorsing Texas’s scheme to insulate its law from the fundamental protections of Roe v. Wade,” Newsom said in a statement. “But if states can now shield their laws from review by the federal courts that compare assault weapons to Swiss Army knives, then California will use that authority to protect people’s lives, where Texas used it to put women in harm’s way.”

Newsom was referring to a Supreme Court decision Friday in which the court ruled that the Texas “heartbeat law,” which bans most abortions after a fetal heartbeat can be detected, could remain in place while abortion providers sue the state.

Newsom said he was working with the state legislature and Democratic California Attorney General Rob Bonta to develop legislation that uses Texas’ strategy of empowering private litigation as a way to deter offenders.

“I have directed my staff to work with the Legislature and the attorney general on a bill that would create a right of action allowing private citizens to seek injunctive relief, and statutory damages of at least $10,000 per violation plus costs and attorney’s fees, against anyone who manufactures, distributes, or sells an assault weapon or ghost gun kit or parts in the state of California,” Newsom said.

“Ghost guns” are guns manufactured in part using a 3-D printer, which makes them harder for law enforcement officials to trace.

“If the most efficient way to keep these devastating weapons off our streets is to add the threat of private lawsuits, we should do just that,” Newsom said.