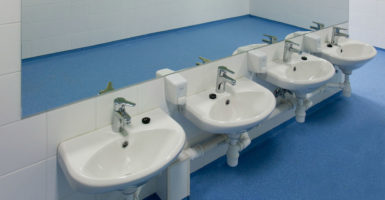 “The new guidelines reflect what we’ve heard from students and teachers, parents, and pastors,” the superintendent says of the transgender rules. (Photo: Spaces Blend Images/Newscom)

Administrators of a Texas school district changed guidelines for transgender students to involve parents and work with families on a case-by-case basis, after an uproar among parents.

The Fort Worth Independent School District announced the two new pages of guidelines dated July 19 after parents and others had a chance to speak at school board meetings, six public forums, and five meetings of a safety advisory panel, among others.

“The new guidelines place a heavy emphasis on involving parents and trusts students, teachers, and parents to work together to make the right decisions,” Superintendent Kent Scribner said in a prepared statement.

“We are grateful Superintendent Scribner reversed and repealed his illegal transgender directive,” a group of students, parents, and taxpayers called Stand for Fort Worth, said of the change.

The school district, comprised of 143 schools and 87,000 students, said it received comment from 235 individuals, including 119 separate emails.

“The new guidelines reflect what we’ve heard from students and teachers, parents, and pastors,” Scribner said. “Our focus from the beginning has been the safety of all children and that, overwhelmingly, was the concern we heard from our parents and others.”

The previous eight pages of guidelines, approved by Scribner in April, allowed students to use the male or female restroom of their choice and directed school personnel to address a student by the name or gender pronoun he or she prefers, even without permission from a parent or guardian.

“It’s not surprising to see concerned parents in Fort Worth … standing up to school bureaucrats to ensure the safety and privacy interests of their children.” —Roger Severino @Heritage

The Board of Education Trustees oversees the management and policymaking of the Fort Worth school district.

Scribner prepared the original guidelines, “completely done in secret,” and without “all the board members being aware of it, much less having parents having input on the process,” Julia Keyes, a Fort Worth resident and mother of five children, told The Daily Signal.

Keyes, a member of Stand for Fort Worth, said parents and others were “outraged” and sent over 2,000 emails to school board members  to hold the superintendent accountable.

“It was really the community that rose up,” Keyes said.

In May, the Obama administration issued a transgender student directive to schools around the nation, threatening to withhold federal funding if schools do not open up restrooms and shower facilities based on a student’s chosen gender identity.

Roger Severino, director of the DeVos Center for Religion and Civil Society at The Heritage Foundation, told The Daily Signal:

Texas and 23 other states have already sued the administration over its lawless edict on school showers, bathrooms, and dorms. So it’s not surprising to see concerned parents in Fort Worth and around the country standing up to school bureaucrats to ensure the safety and privacy interests of their children.

“We feel good about the guidelines as they stand,” Keyes said. “However, trust has been broken with the superintendent.”

In an email to The Daily Signal, Matthew Kacsmaryk, deputy general counsel at First Liberty Institute, said Scribner’s original guidelines overrode rights guaranteed by the First and 14th Amendments to the Constitution:

Texas Lt. Gov. Dan Patrick, a Republican, called for Scribner’s resignation over his unilateral implementation of the original guidelines.

Kacsmaryk said the Fort Worth school district’s original directive “expressly discouraged use of binary terms like ‘boy’ and ‘girl’” and made “no reasonable accommodation for dissenting Muslims, Jews, Mormons, Catholics, and Protestants who adhere to the Book of Genesis and continue to believe that God ‘created them male and female.”

The First Liberty Institute lawyer, who consulted with Keyes and her husband before Scribner backed down, added:

This is not diversity but displacement, the absolutist imposition of a sexually revolutionized view of the human person without any accommodation for religious dissenters who may have a different view of man and woman, male and female.

The group Stand for Fort Worth said it had “mobilized a bipartisan, multiracial coalition of students, taxpayers, and parents who were initially excluded from the process but whose voices have now been heard.”

The new guidelines say the school district will work with parents to create individual support plans for transgender students to address “the student’s unique needs.”

If the student requests access to an opposite-sex restroom, locker room, or related facility, the campus  administrator, the student and his or her parent or guardian, and guidance counselor will review the request on a case-by-case basis.

The goal will be to create a “safe and supportive environment for students impacted by the accommodation with due recognition of the privacy rights of all students,” the guidelines say.