Whether Putin Attacks Ukraine or Not, He’s Already Won 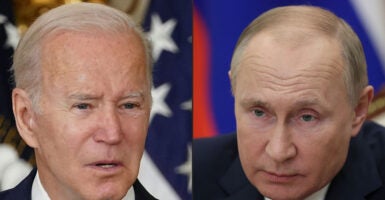 President Joe Biden and Russian bad boy Vladimir Putin have now had their two-hour virtual parley about the Ukraine crisis. Is there any clear sense on how this will all end? No.

The readout from the White House looked thinner than Christmas tissue paper, but from what can be gleaned, the U.S. side put nothing more on the table than what the president and secretary of state have been saying for days: more sanctions.

The threat of sanctions is meant to deter a full-blown Russian invasion of Ukraine. But history shows that sanctions are no more of a deterrent to Putin than a speed bump to a monster truck. Just ask the good folks of occupied Crimea. Or occupied Georgia.

Indeed, sanctions are not for deterring bad behavior; they are a tool of coercion, meant to punish bad behavior. Totalitarian regimes have learned to live with sanctions. Just ask the ayatollah.

By putting only sanctions out there, Biden looks feckless. And that means that, whether he attacks Ukraine or not, Putin has already won. The Russian strongman has shown he can threaten and intimidate the transatlantic community, while they do nothing more than wave their fingers at the bully who made a career of breaking fingers for fun.

What could Biden have done better?

Biden can’t say the U.S. will fight to defend Ukraine. Ukraine is not a treaty ally. What’s more, the U.S. doesn’t have to fight for Ukraine. Ukrainians can do that. There are 44 million of them. If Putin attacks, he will have a fight on his hands. The Russians would have to strike in winter, against determined defenders.

What Biden should have done is hammer Putin for threatening the transatlantic community at all. Biden should be fit to be tied—not just for Ukraine, but for Russian meddling in Bosnia, the Belarus border crisis, energy blackmail against Moldova, and other outrages.

Rather than just threatening sanctions, the White House should be demanding immediate sanctions from Congress on the Nord Stream II pipeline. The administration should be working with our allies to determine who will send what to best help Ukraine bolster its air defenses, electronic warfare capabilities, and more.

Rather than dust off contingency plans for the emergency evacuation of the U.S. Embassy in Kyiv, the administration should double down on supporting Ukraine and reaffirm U.S. support of Moldova and Georgia (which also have territory occupied by Putin).

What’s needed most of all is leadership.

The White House boasts that it is consulting with key European powers before and after the Putin meeting. Big deal. Biden shouldn’t be talking. He should be taking charge. We ought to be hearing a steady stream of proactive actions coming out of the allies. Instead, they sound like a cluster of Munchkins fretting about the Wicked Witch of the West.

We know Putin had demanded an end to NATO enlargement and a promise from the allies to stay away from Moscow’s near abroad. Reports are Biden did not and won’t agree to that. That’s as it should be, but it is not enough. It smacks of Biden’s quiet statecraft boycott of the Beijing Olympics, which amounted to the diplomatic version of slipping China a somewhat strongly worded note under the door.

Biden should have gotten in Chinese President Xi Jinping’s face over the Olympics and demanded other democracies do the same. He should have done likewise to Putin. He should have run to make a joint speech before Congress saying it would be a cold day in hell before he gives Putin veto power to determine which free nations could join NATO in pursuit of collective security.

Biden has a double risk. Having disastrously failed in Afghanistan, one more massive foreign policy reversal on his watch could prove politically fatal for the president. The lack of strong leadership now also risks letting NATO solidarity break up under Putin’s pressure.

Europe is a vital partner in today’s world. We can’t defend ourselves or the free world alone. We need a strong NATO. Putin looks to the current crisis as the next step in unraveling NATO. If Biden allows him to succeed, he will put all of us at risk.