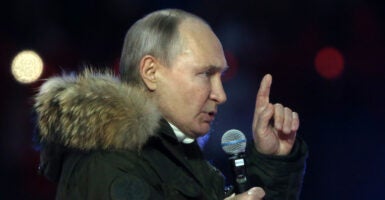 Vladimir Putin has never been averse to taking risks—especially those that make him look stronger at home, while undermining the confidence and solidarity of the West.

Now, with unrest in his backyard, Europe preoccupied with COVID-19, and a U.S. president who looks disengaged and distracted, Putin appears to be on the prowl again. This time, in his old hunting ground: Ukraine.

An unprecedented military buildup on the Ukrainian border suggests Putin plans to use Russian forces in a full-blown military engagement with that already war-torn country. The goal would be to gain significant territories, giving Moscow direct, in-land access to Crimea—the territory Putin forcefully wrested from Ukraine in 2014.

If this endeavor succeeds, and if costs (both financial, but military) allow, Putin might also set his sights on taking Odessa and everything to the East of river Dnieper.

Risky? Yes. But if he pulls it off, Putin stands to reap tremendous benefits: a huge popularity boost at home and another demonstration of the West’s incapacity to deal with the Russia strongman.

If allowed, this will be the most important military success of the Russian Federation since the end of the Cold War.

There is a real possibility Putin may take this dare. After all, he’s done it before.

It started with Chechnya. In 1999, Putin, a then largely unknown politician, was installed atop the Russian power system. Shortly thereafter, Russian troops entered Chechnya, with Moscow establishing direct control of the country by May 2000. By year’s end, Putin’s approval rate had jumped to 84%.

By November 2013, economic problems had sent his job approval ratings south once more (to 61%). But with the 2014 invasion and annexation of Crimea, his popularity rebounded to 89% by summer of 2015.

Putin’s approval rating has trended downward since April 2018. Though still high by Western standards, it has fluctuated between 68% and 59% over the last 12 months.

But the Russian economy is not doing well, and Putin’s handling of the pandemic has been even worse—factors that may well drive approval even lower. As we’ve seen, Putin often follows declining approval rates with approval-boosting military campaigns.

Forewarned is forearmed. The West needs a clear strategy to prevent new Russian aggression against Ukraine. Cosmetic measures will not do the job.

Ukraine needs an immediate boost for its defensive capabilities. If nothing else, the United States and U.K. need to live up to their promises in the 1994 Budapest agreement, under which Kyiv denuclearized in exchange for guarantees of its territorial integrity and sovereignty, provided by three nuclear states: the U.S., U.K., and Russia.

We know where Russia stands in this situation. There is a need for greater clarity from the U.S. and U.K.

The U.S., U.K., Germany, and France are making diplomatic efforts to prevent the escalation. But talking to Ukrainian leaders, while important, cannot prevent disastrous developments.

Long term, NATO needs to integrate Ukraine (and Georgia) into its system of collective security. Putin’s latest buildup demonstrates once more that countries left outside of NATO—despite their own commitment to the alliance and NATO’s declared intent to accept them—will remain targets of Russian aggression and manipulations.

Ukranian sovereignty and territorial integrity (along with that of Georgia) should be elevated to top-level priorities in U.S. European policy. Helping Ukrainians build a strong, sovereign state is in the long-term U.S. interest.

As for Putin, he this week signed a law allowing him to run for two more six-year presidential terms. If not now, then certainly sometime in the future he will need another popularity boost—and that will place neighboring nations trying to break free from Russian influence once more in Putin’s crosshairs.