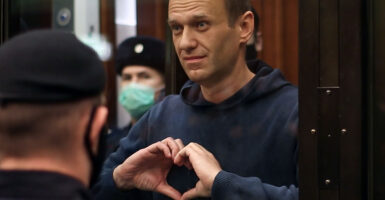 As Alexis Mrachek of The Heritage Foundation has reported, Russian protesters have taken to the streets in recent weeks to express widespread anger and frustration with ongoing corruption in their country.

Coincident with Alexei Navalny’s arrest and conviction by Russian President Vladimir Putin’s police state on trumped-up charges, allies of the opposition leader released a devastatingly effective YouTube video showing the Russian people and the world incontrovertible proof of the regime’s systematic corruption in the years since Putin and his KGB cronies seized power.

The video is also a vivid illustration of the assault by the Putin dictatorship on economic freedom in Russia, which is measured annually by The Heritage Foundation’s Index of Economic Freedom.

The 2020 edition of the index reports that the Russian economy is burdened by structural weaknesses, low levels of investment, and a poor demographic outlook. The connection between political power and property is strong in Russia, with some senior officials (e.g., Putin) using their government positions to amass vast property holdings.

Corruption is pervasive in the highly centralized, authoritarian government. Private businesses are routinely targeted for extortion by both law enforcement and organized criminal groups.

The Navalny video brought to light the Heritage index’s analysis of corruption and weak rule of law, illustrated with real people and real places in Russia.

According to FoxNews.com, the video has been viewed more than 100 million times around the world. In it, Navalny patiently and comprehensively paints a picture of a corrupt, ambitious, and totally cynical young KGB officer named Putin. Beginning in the early the 1980s, Putin and his KGB friends schemed and plotted their way to unthinkable power and wealth in post-Soviet Russia.

The video features the most tangible and outrageous symbol of that corruption; namely, the neoclassical “Putin’s Palace” on the Black Sea, with its “casino, ice-skating rink, theatre, and helicopter pad.”

The video outlines an extensive paper trail linking ownership of the billion-dollar palace to Putin, his protestations to the contrary notwithstanding.

The palace expose also spotlights the index’s summary describing the lack of economic freedom in Russia today. It is weak because the combination of a subservient judiciary, rampant corruption, and links among bureaucrats and organized criminal groups have compromised government integrity.

As long as the government tolerates the high levels of corruption that the Navalny video exposes, while also pursuing statist, nationalist, and protectionist economic policies and maintaining a cautious approach to inward foreign investment, the index predicts that expansion of economic freedom in Russia will be difficult.

Navalny, with tremendous courage, is fighting for greater economic freedom in his homeland. His vision of a better way of life and standard of living in Russia could be realized if enough of his fellow citizens exhibit the same bravery and demand it. The early signs for that are cautiously positive.