Evidence Suggests Russia Has Again Used Poison to Punish an Opponent. The International Response Must Be Swift and Stern. 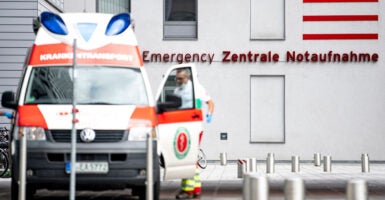 Alexei Navalny, a prominent Russian political leader and critic of the Kremlin, may have been poisoned with the Russian military-grade nerve agent infamously known as “Novichok.” He was treated at the Berlin Charite in Germany, pictured here. (Photo: Fabian Sommer/dpa/Getty Images)

News reports on Wednesday out of Germany indicate that prominent Russian political opposition leader Alexei Navalny, who recently became ill in Russia, may have been poisoned with the Russian military-grade nerve agent infamously known as “Novichok.”

As you recall, about two weeks ago, Navalny reportedly took mysteriously—and seriously—ill while on a flight back to Moscow, requiring an emergency landing and hospitalization in a Siberian city.

A poison may have been put in his tea.

After a delay, Navalny was surprisingly allowed to be medevaced out of Russia for medical treatment in Germany. On Wednesday, the German government announced that medical tests on Navalny showed the presence of the Russian nerve agent Novichok.

Though Berlin is asking questions of Moscow, it’s not likely to get a straight or satisfactory answer.

And if the name Novichok sounds familiar, that’s because this isn’t the first time that this highly lethal chemical agent has been used against someone the Kremlin perceived to be an adversary of Russian President Vladimir Putin—or Mother Russia.

Just two-plus years ago, Russian agents used Novichok in a brazen assassination attempt in the United Kingdom on Sergei Skripal, a former officer of Russia’s military intelligence directorate and a one-time asset of British intelligence’s MI6.

Skripal and his daughter survived the 2018 attack, while two innocent passersby who unwittingly came upon the agent in a discarded perfume bottle and a police officer investigating the crime were also poisoned; one of whom died.

Of course, the use of Novichok in either the Skripal or Navalny cases would put Russia in violation of the multilateral Chemical Weapons Convention, which is purposed with “prohibiting the development, production, acquisition, stockpiling, retention, transfer or use of chemical weapons.”

The United States agrees—and Novichok isn’t the end of it.

Indeed, this latest attack only adds to the mounting evidence that suggests that Russia may retain an active, undeclared chemical weapons program, which may include chemical weapon development, production, and stockpiles for offensive, military, and other purposes.

In addition, the U.S. State Department believes that Russia possibly provided assistance to a chemical weapons attack the Syrian regime perpetrated in the bloody civil war in 2018.

The State Department also contends that Russia maintains a pharmaceutical-based agent program for offensive military and other harmful purposes, which likely includes carfentanil, a synthetic opioid.

Germany will reportedly advise the Netherlands-based Organization for the Prohibition of Chemical Weapons, the implementing agency of the Chemical Weapons Convention, of its findings about Navalny and his poisoning with Novichok.

Berlin also intends to notify NATO and the European Union about the new charges against Russia over its latest use of chemical weapons in order to discuss a response to it.

The response from the international community should be both swift and stern.