US Slaps New Sanctions on Russia for 2018 Nerve Agent Attack 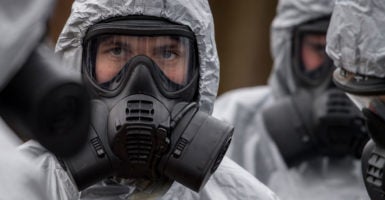 Military personnel wearing protective suits investigate the poisoning of Sergei Skripal on March 11, 2018, in Salisbury, England. Skripal was granted refuge in the U.K. following a "spy swap" between the U.S. and Russia in 2010. (Photo: Chris J. Ratcliffe/Getty Images)

ABOARD A U.S. AIR FORCE AIRCRAFT—The U.S. has announced a new round of sanctions on Russia for its use of a chemical weapon in 2018 during an attempted assassination of former Russian spy Sergei Skripal and his daughter on British soil.

In the March 2018 attack in the town of Salisbury in the United Kingdom, two Russian hitmen used a nerve agent called Novichok in a failed hit on Skripal, who had defected to the U.K. Skripal survived, but another woman named Dawn Sturgess, 44, later died after exposure to the nerve agent.

“This act endangered thousands of lives in Salisbury and Amesbury, and caused the hospitalization of the Skripals, a British police officer, and two civilians, one of whom subsequently died from her exposure,” State Department spokeswoman Morgan Ortagus said in a statement issued Saturday to journalists flying with Secretary of State Mike Pompeo from Thailand to Australia.

The sanctions will fall under the 1991 Chemical and Biological Weapons Control and Warfare Elimination Act. The measure will restrict Russia’s access to U.S. banking and the U.S. market for issuance of non-ruble denominated debt and debt financing, as well as access to items made in the U.S. that are vital to Russia’s chemical and biological weapons program.

According to a State Department document reviewed by The Daily Signal, “These measures could curtail Russia’s access to billions of dollars of bilateral commercial activity with the United States.”

The sanctions will take effect after a 15-day congressional notification period and are set to last 12 months.

The measures call on Russia to provide restitution to the victims of the Salisbury attack and allow international inspectors to verify Russian assurances that such an attack will not happen again.

Signed by President Ronald Reagan and Soviet leader Mikhail Gorbachev in 1987, the Intermediate-Range Nuclear Forces Treaty, or INF, banned missiles with ranges between 300 and 3,400 miles.

The United States suspended its obligations under the INF Treaty in February, claiming that Russia had been developing and deploying missiles in violation of the pact’s limits for years. The U.S. said it would completely withdraw from the treaty within six months of the suspension, unless Russia returns to compliance.

In turn, Russia denied any violations and announced its suspended participation from the INF treaty, too. In a February address to Russian lawmakers, Russian President Vladimir Putin said Moscow had plans to develop a new generation of missiles and target them at the United States if Washington followed through on canceling the Cold War pact and deployed new missiles to Europe.

The United States already has a bevy of sanctions in place on Russia for its seizure of Ukraine’s Crimean Peninsula in 2014, as well as additional sanctions for Russia’s role in an ongoing war in Ukraine’s eastern Donbas region.

The parallel timing of the new sanctions on Russia along with the INF withdrawal marks a frosty turn in U.S.-Russia relations. The two moves also come at a time when the U.S. is ratcheting up pressure on Iran and China in other disputes.