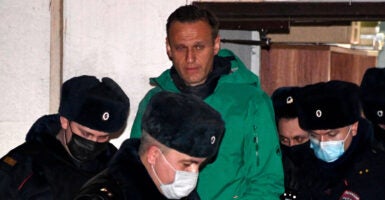 Russian opposition leader Alexei Navalny is escorted out of a police station on Jan. 18 in Khimki, outside Moscow, following a court ruling that ordered him jailed for 30 days. (Photo: Alexander Nemenov/Agence France-Presse/Getty Images)

Alexei Navalny returned to Russia from Germany on Jan. 17 and was arrested at the airport upon arrival.

Navalny, a leading Russian political opposition figure, had been recovering in Germany since late August, when he was poisoned with Novichok, a military-grade nerve agent, in Tomsk, Russia, in an assassination attempt.

The reason for his return isn’t entirely clear, but it undoubtedly demonstrated bravery and patriotism toward his homeland.

Navalny is the most prominent opposition figure in Russia. For years, he and his team have run a YouTube channel exposing the corruption of Russian President Vladimir Putin and his cronies. His channel currently has nearly 2.25 million subscribers.

Navalny tried to run for Russian president in 2018, but was barred from doing so because of a conviction on an alleged embezzlement charge.

Nevertheless, he has drawn quite a following over the years, and not just from Russian citizens.

On the night Navalny was arrested, he produced a video from the police station calling for Russians to “take to the streets.”

And later, as he was being led out from the police station to a police van, he shouted back: “Don’t be afraid.”

The video and images of him in both instances spread rapidly over social media.

Navalny has gained his worldwide following thanks to his image as a democratic leader in Russia. He speaks persuasively, exposes the corruption of the Kremlin and related entities, and embodies the hope of a better future for Russia after Putin.

Despite denying that Navalny is a threat, Putin obviously feels threatened by him, at least to some extent, given the fact that he likely directly called for Navalny’s assassination and recent arrest at Moscow’s Sheremetyevo International Airport. (In fact, Russian state media cameramen knew of Navalny’s arrest before his own legal team did.)

But in calling for these actions against Navalny, Putin reveals a weakness in himself and his presidency. He does not appear as the Russian strongman he claims to be.

In response to Navalny’s arrest on Sunday, the United States, the European Union, and Canada have all called for his release. A number of European countries and the U.S. are also considering implementing sanctions against the Russian Federal Penitentiary Service and the Russian Interior Ministry.

Sen. Mitt Romney, R-Utah, has even called for the U.S. Senate to sanction Putin directly.

The arrest of Navalny symbolizes a larger movement in Russia against the current regime. He is expected to be incarcerated until Feb. 15, but it’s not abnormal for detentions in Russian prisons to be extended.

Because of his imprisonment, Russians will likely protest on Jan. 23. Navalny’s team’s headquarters are already preparing for rallies across the country that day.

So far, Russian citizens have been participating in single-person protests against Navalny’s arrest. Those are the largest-size protests allowed.

The international community overall supports Navalny and his cause. Putin definitely does not have the upper hand in this case.

A better future for Russia still might be far off, but Navalny embodies the hope for it, for Russian citizens, and for countries worldwide.